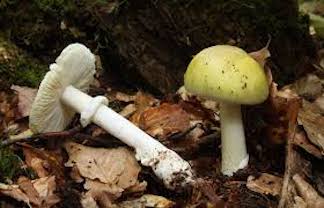 Multiple reports have recently surfaced of dogs dying after eating death cap mushrooms in San Luis Obispo County, and a local dog rescue is warning pet owners about the trend.

Death cap mushrooms, or Amanita phalloides, are a deadly poisonous fungus. The mushrooms typically have a white cap with yellow-green shades and white gills under the cap.

Comments on the Facebook post suggest other dogs have also been dying as a result of consumption or exposure to death cap mushrooms. One poster, Sara Maddux, said she lives near Lopez Lake, and she lost her dog and that another dog also recently died in the Huasna-Lopez area because of death cap mushrooms.

“Please, please dog owners, be on the look out as we don’t want any of you to lose your precious dogs in such a senseless manner,” Meade Canine Rescue is warning.