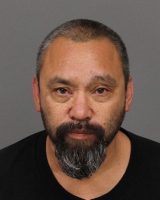 A Grover Beach man, who is suspected to have been carrying a controlled substance, got off his bicycle and tried running away from police in Arroyo Grande Monday night, but was eventually caught and arrested.

At about 11:35 p.m., an Arroyo Grande police officer tried to pull over a man riding a bicycle for a traffic violation in the area of Poplar and Juniper streets. The man fled by foot, leaving behind a small amount of  suspected narcotics, according to police.

Officers established a perimeter and began searching the area. Officers located Manual Pineda Javier III as he was climbing a fence near a home in the 1400 block of Strawberry Avenue.

Officers arrested Javier, 50, and booked him into the San Luis Obispo County Jail on charges of resisting arrest and possession of a controlled substance.