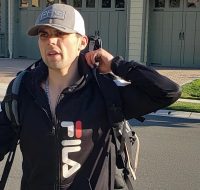 San Luis Obispo County Sheriff’s deputies are searching for a man and woman who allegedly attempted to burglarize a Nipomo Mesa home on Monday and were confronted by a neighbor as they fled with an alarm sounding. A surveillance camera also captured the man on the porch of the home, but the suspects managed to get away and evade capture.

At about 5:30 p.m., an alarm sounded at a home in the 1700 block of Trilogy Parkway in Nipomo. Deputies arrived and found a witness next door who described encountering a young couple leaving the home as the alarm was sounding, a sheriff’s office press release states.

The witness spoke with the couple. The man and woman did not provide a credible reason why they were in the neighborhood, according to the sheriff’s office.

Sheriff’s officials describe the male suspect as a white man in his mid 20s who is approximately 5 feet 6 inches to 5 feet 10 inches tall and weighs about 150 to 170 pounds. He was wearing a PFG hat, blue jeans and a black FILA sweatshirt with no undershirt and a silver chain around his neck. Additionally, the man had a black backpack on his back.

The female suspect is described as a white woman in her mid 20s who is heavier set with light brown hair. She, too, was wearing a hat, blue jeans and a backpack.

Anyone who has information about the incident is asked to contact the Sheriff’s Detective Division at (805) 781-4500 or anonymously call Crime Stoppers at (805) 549-STOP.