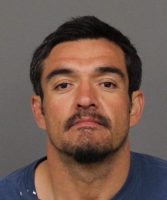 On March 18, Robert Torres, 38, approached a man outside the airport’s main terminal, punched the man in the face, and then walked toward the terminal, the victim told investigators.

Shortly later, Torres followed an employee into the terminal building. The employee told Torres that the terminal did not open until 4 a.m. and tried to escort him outside.

Torres then punched the airport worker in the face, threatened to kill him, and began choking him. The victim managed to break free and call 911.

Both victims suffered injuries. Their conditions are unclear.

Authorities arrested Torres and charged him with two counts of battery and one count of making terrorist threats. As of Tuesday morning, Torres remains in San Luis Obispo County Jail with his bail set at $50,000.