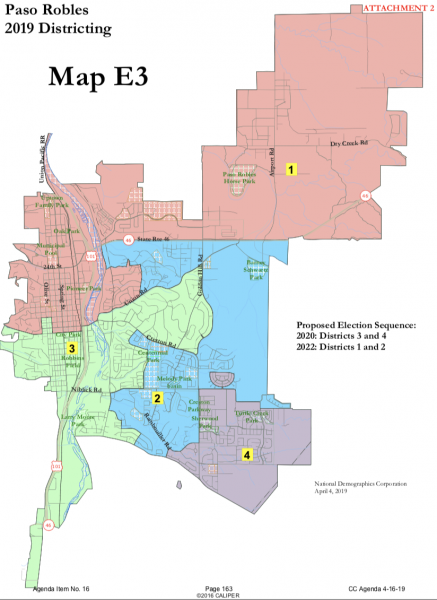 The Paso Robles City Council voted last Tuesday to finalize a shift from an at-large electoral system to by-district voting, a move that is intended to appease a lawyer who threatened the city with a lawsuit over the alleged suppression of Latino voting rights.

Shenkman, who has threatened multiple cities with lawsuits if they do not change their electoral systems, said racially polarized voting was diluting the Latino vote in Paso Robles.

No Latino had run for city council in Paso Robles in the last 20 years, despite Latinos comprising about 34.5 percent of the city’s population, Shenkman wrote. The letter threatened a lawsuit if Paso Robles did not shift to a by-district electoral system.

The city has maintained that racially polarized voting has not occurred in Paso Robles, and residents oppose by-district elections. But, because of the high risk of losing in court, city officials opted to comply with the demand of shifting to a by-district system.

Elections for the districts 3 and 4 seats will take place in 2020. Districts 1 and 2 are expected to elect their council members in 2022.

Despite approving the electoral changes, the city is considering returning to an at-large system in the future, if it can ensure the system would be compliant with the California Voting Rights Act. Following the 2020 census, even if Paso Robles keeps its new voting system, the city’s district boundaries are expected to change.