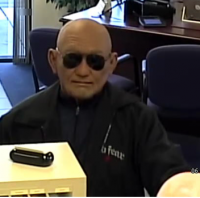 Police are looking for a suspect wearing an “old man” mask and sunglasses who robbed the U.S. Bank in San Luis Obispo on Friday.

Shortly before 5 p.m., the male suspect entered the U.S. Bank at 3991 South Higuera Street, in the shopping center with Trader Joe’s and Food 4 Less. He demanded money from a bank teller, which he then placed in a dark-colored satchel with white stitching and a zipper.

After securing the money, the suspect fled the bank. Officers arrived in the area and searched the shopping center and an adjacent neighborhood, but failed to locate the suspect. 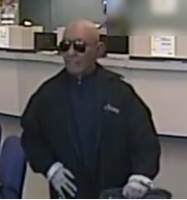 In addition to the mask and sunglasses, the robber was wearing all dark clothing and gloves. Police are circulating surveillance images of the suspect and are asking anyone who has information about the robbery to call police at (805) 781-7312 or Crime Stoppers at (805) 549-STOP.

No one was injured during the robbery.