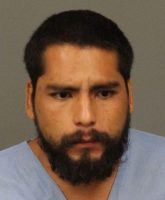 A San Luis Obispo judge sentenced an Arroyo Grande man to two life sentences on Wednesday for stabbing and beating both his wife and his aunt through marriage, but the defendant could get out of prison after spending a little more than two decades behind bars.

On Sept. 9, 2017, Alberto Isaac Gonzalez-Penaloza, 28, stabbed the two women multiple times with several knives and struck them with a shotgun at a home at 2708 Waters End Road. Sheriff’s deputies found one of the women with a knife in her neck.

Gonzalez-Penaloza then fled into a rugged area near Lopez Lake. Deputies had difficulties tracking him because of heavy vegetation, but authorities managed to locate Gonzalez-Penaloza and arrest him after a couple of hours.

In January, Gonzalez-Penaloza pleaded guilty to two counts of attempted premeditated murder and enhancements of inflicting great bodily injury, using a firearm and using a knife. By law, Gonzalez-Penaloza could be eligible for parole after serving at least 22 years in prison.

Judge Jacqueline Duffy, who sentenced Gonzalez-Penaloza on Wednesday, ordered him to pay more than $13,000 in restitution. Duffy also issued a criminal protective order prohibiting Gonzalez-Penaloza from contacting the victim for 10 years, the maximum time allowed by law.

During the sentencing hearing, a prosecutor read a statement from one of the victims.

“The damage he has caused me is an everyday struggle,” the victim said in the statement. “It has been emotionally, psychologically, physically and financially damaging. The devastating suffering I endured from the impact the defendant has created has rerouted my life emotionally and physically.”

Duffy told the victim it was a miracle she survived and that she is incredibly brave and resilient.