For the third time this year, developer Ryan Petetit’s sentencing for a 2015 violent assault and a trial setting conference regarding a drunk in public and resisting arrest case from 2012 were delayed, this time until June 27.

In August 2012, Petetit and his then girlfriend Michelle Jewsbury were socializing with friends in Santa Barbara when Petetit became angry, dragged Jewsbury from a bar and forced her into a taxi, according to Jewsbury. Back at their hotel room, Petetit placed both of his hands on her neck, pushed Jewsbury up against a wall and began to choke her, she said.

Responding to her screams, officers arrived, arrested Petetit, and booked him into the Santa Barbara County Jail. Jewsbury, however, refused to testify and the charges were dropped.

On Oct. 13, 2012, Petetit spent the evening drinking at the Spyglass Inn in Pismo Beach. Outside the bar, Petetit had an altercation with an officer that resulted in Petetit on the ground with scratches on his face. The officer booked Petetit into the San Luis Obispo County Jail for resisting arrest and public intoxication.

On Jan. 1, 2013, Petetit, Jewsbury and a group of friends were celebrating at the Cliff’s Resort in Pismo Beach when Petetit threw a drink in Jewsbury’s face because he thought she was flirting with another man, according to several witnesses to the event who have asked to remain anonymous out of concern for their safety.

Outside the club, Petetit grabbed Jewsbury by the throat, and slammed her head into a concrete bench. Petetit then grabbed her head and smashed it several more times into the concrete, the witness said.

“I thought he had killed her,” the witness said. 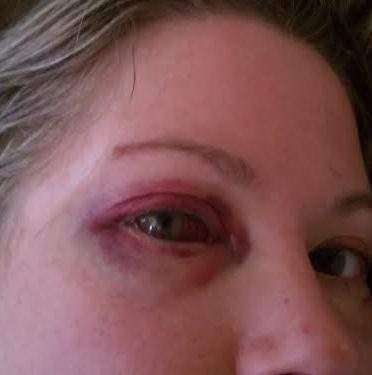 Pismo Beach police arrested Petetit for a misdemeanor charge of corporal injury and booked him into the San Luis Obispo County Jail. However, that charge, too, was eventually dropped.

In 2014, two years after Petetit first got in a tiff with officers outside the bar at the Spyglass Inn in Pismo Beach, Petetit’s first trial setting conference was scheduled. And five years later, a hearing to set a date for trial is still being continued.

On Aug. 28, 2014, Petetit was arrested for and charged with two misdemeanor counts for writing bad checks. The charges were dismissed after Petetit agreed to enter the San Luis Obispo County bad check program, according to court records.

On Nov. 22, 2015, a verbal argument ensued between Petetit and a girlfriend, who has asked not to be named, at a home they shared in Arroyo Grande.

During the argument, Petetit grabbed the victim by the throat and began choking her. He then dragged her to her feet and shoved her head through a bathroom window, shattering the glass.

The victim attempted to escape, but Petetit took her phone and pushed her into a closet, refusing to release her, she said. While the victim fought to free herself, Petetit slammed her head into the tile floor, knocking her unconscious, she said.

On Nov. 13, 2018, Petetit pleaded guilty to assault with great bodily injury, false imprisonment with force, dissuading a witness and two charges of inflicting corporal injury on a cohabitant. He was scheduled for sentencing in Jan.

On Jan. 17, San Luis Obispo County Judge Barry LaBarbera agreed to a three month delay in his sentencing so Petetit could legally change his name to Ryan Joseph Wright. At that time, the trial setting conference for his 2012 arrest was also delayed.

On April 24, Petetit’s attorney Patrick Fisher asked to speak to Judge Dodie Harman in chambers to discuss another extension, until after a June hearing in Los Angeles over an objection to Petetit’s requested name change. However, because the assistant district attorney assigned to the case, Kristy Imel, was not at the hearing, Harman declined the meeting and set a sentencing hearing for May 2.

On May, 2, Harman continued the sentencing hearing until late June to allow the SLO County Probation Department to produce another sentencing report, this one to include a mental health evaluation.

On June 27, Petetit is scheduled for sentencing for the assault conviction, and also for a trial setting conference for the 2012 drunk in public and obstruction arrest.

One Comment about “Petetit avoids facing justice for a 2012 arrest, again”