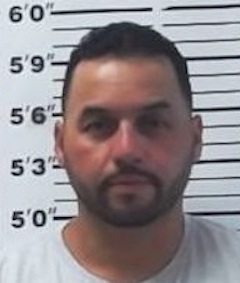 For the second time in the span of about one month, an inmate escaped the minimum security Federal Correctional Complex in Lompoc.

Jesus Antonio Hernandez, 42, escaped the Lompoc prison camp on Monday, according the Federal Bureau of Prisons.

At about 10:30 a.m., guards discovered Hernandez was missing. The United States Marshals Service and local law enforcement agencies then began searching for him. [KCOY]

Hernandez was convicted in Kentucky of engaging in a continuing criminal enterprise, conspiracy to transport funds and engaging in financial transactions in criminally derived property less than $10,000. He was sentenced 27 years in prison.

The minimum security facility, also known as a satellite camp, is adjacent to the medium security federal penitentiary in Lompoc. In recent years, more than a dozen inmates have walked away from the Lompoc prison camp, including Heriberto Gonzalez, a convicted marijuana dealer, who escaped last month.