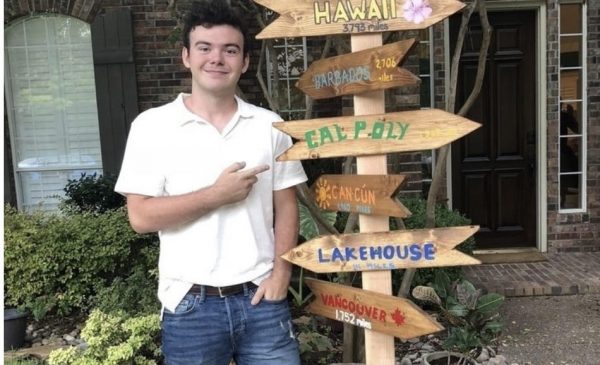 A lawsuit filed by a winery company that put on hold the El Campo and US 101 safety improvements that were to be started on May 13, came as an unexpected and crushing disappointment to us. Vintage Wine Estates, new parent of Laetitia Winery, filed the lawsuit last week blocking the construction of the safety improvements at El Campo, Tower Road (Laetitia’s entrance), and two other crossings of U.S. Highway 101.

After our son, Cal Poly Freshman Jordan Grant, was killed at El Campo Oct. 7, 2018 by Rich Giuli making an unsafe left hand turn across Highway 101, we have fought long and hard to obtain unanimous approvals from all government jurisdictions to eliminate these unsafe left hand turns. Caltrans then agreed to construct median barriers at El Campo, Tower Road and two other crossings, as Caltrans believes any partial closure at El Campo needs to be replicated at Tower Road to avoid a different unsafe road condition arising, that of U-turns on Highway 101 at Tower Rd.

Jordan’s accident happened seven weeks after Suzie Smith’s Lexus was hit there the same way with serious and life altering damage to her back and brain. Think about that – it was just seven weeks between those two identical accidents. That is why we take any delay, even a few weeks, caused by the Vintage vs Caltrans litigation as unacceptable harm to public safety on Highway 101.

We called for a boycott as we recognized that this was an intentional business decision by Vintage to try to maintain wine tasting traffic (even though with the expected safety changes their customers would still have had access to their winery but some would have to drive a little further). So they intentionally chose to delay the safety improvements at El Campo as an understood consequence of their litigation decision.

Vintage is gambling that they can quickly negotiate a better outcome with Caltrans for their Tower Road access and protect their profits from wine tasting traffic making left turns into their winery from southbound 101. But to do so they have had to take “hostage” the safety improvements at El Campo, as Caltrans, rightly or wrongly, has all four crossings tied together.

So Vintage is gambling that no one else will be injured or killed at El Campo or the other three crossings while these safety improvements are on hold. Is it ok with you that they make this gamble for several  weeks (maybe months, maybe years) with your son or daughters life on Highway 101? Gamble with your wife or husbands life? Would you have agreed and offered that to them, all in support of protecting their profits? We do not agree. That is not a reasonable and responsible exchange of potentially someone’s life for profit.

Imagine if Caltran’s was about to make these safety improvements on Oct. 1, 2018, and Vintage sued on that date to put them on hold. Jordan would be killed seven days later while negotiations were underway between Vintage and Caltrans. So no, we do not agree.  That would not be a reasonable and responsible exchange of Jordan’s life for profit.

Over the last 48 hours, I have been working with Pat Roney, their CEO, and other executives and do believe them to be honorable, well meaning people, that are excellent additions to the south county community. I like them and am working with them to achieve the mid-term goal – to build within five years a desperately needed underpass/overpass in this area to meet a range of community needs, as well as, Laetitia Winery’s access needs.

I agree that Vintage cannot be held responsible for what the previous owners of Laetitia Winery did in 2011.

At that time, Laetitia threatened a lawsuit to prevent these same safety changes being made to Tower Road and El Campo. Changes that were designed , funded and proscribed by Caltrans engineers as necessary corrections to unsafe road conditions. Laetitia’s old owners were successful and satisfied to stop the safety changes and then leave it there, allowing injuries and deaths to follow – leading up to Suzie’s accident, then our cherished son Jordan being killed.

That was not a reasonable and responsible exchange of Jordan’s life for profit. The hands of the previous owners of Laetitia Winery are not clean in this sacrifice of public safety, of Jordan’s life, for their wine tasting traffic profits.

However, I also believe that this is not who Vintage Wine Estates, the current owners are. While we have disagreed about the lawsuit just filed, they have also expressed full support for the partial closure of El Campo and the other median crossings.

We understand they want to see a different answer for Tower Road and a commitment by Caltrans to an under/overpass in this area in two to five years. I respect and agree with them for the work they are doing to help the neighbors around El Campo and myself achieve the goal to get an overpass built in the next five years.

What role has Caltrans played in getting to this point? The central and most significant role.

Caltrans failed to fix these crossing in 2011 when they had the funding and their engineers told them it needed to be done. Caltrans has continued to be obstinate in refusing to consider my suggestions for a J-curve turnaround at Tower Road to handle the U-turn concerns and to leave Laetitia unharmed by the El Campo safety changes.

Even the SLOCOG staff included a J-curve in their Dec. 5 Power Point presentation (at the end, but did not review in the meeting).

Caltrans refused to listen to the new owners of Laetitia leaving them believing they had no option but to sue to be heard and protect their rights. Laetitia was identified as a stakeholder in the planning document leading up to the scheduled safety changes, yet at the end of the day, was not listened to.

So while valuing and respecting the relationship being rapidly built with Vintage Wine Estate executives those of us who want public safety put first will continue to oppose the delay in safety improvements caused by the litigation. Caltrans and Vintage need to resolve the litigation quickly.

Given what Vintage has told us, we have moderated many of our proposed activities, pending the results from meetings being worked on with Caltrans. We recognize and have a full understanding of Caltrans central role in creating this problem by failing to resolve Laetitia’s access issues during the planning over the last seven months and Caltrans’ unwillingness to enter into serious dialogue about how to plan and construct an overpass in the area in the near term (two to five years).

We hope and pray all will be quickly and cooperatively resolved in a matter of days, Caltrans willing, without any more deaths and injuries at these dangerous Highway 101 crossings.