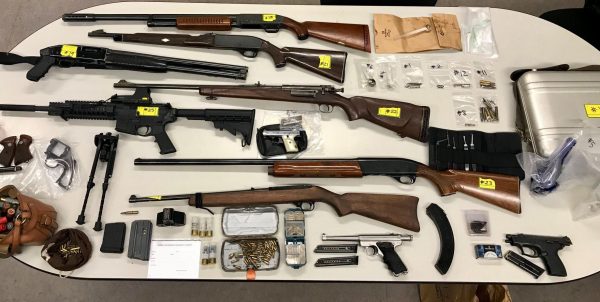 A search of a property just outside the city limits of Santa Maria on Wednesday produced a variety of firearms, including one that had been reported stolen out of San Luis Obispo County, according to the Santa Barbara County Sheriff’s Office.

Investigators also found ammunition, drug paraphernalia and a substance believed to be heroin during the search. Deputies arrested four suspects, including two brothers who are both convicted felons.

One of the handguns was reported stolen out of SLO County. The search also netted numerous rounds of ammunition of various calibers and loaded and unloaded high-capacity magazines.

Both Justine Garcia, 25, and Laura Burson, 54, were arrested for having outstanding $25,000 warrants for probation violations.

The sheriff’s K-9 unit and prison realignment compliance response team helped with serving the warrant and apprehending the suspects.