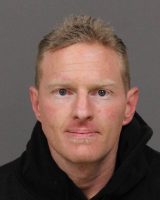 A San Miguel man stole a sex toy from Diamond Adult World in Grover Beach Tuesday evening, which prompted a police chase that ultimately led to his arrest in Atascadero.

Shortly after 8 p.m., Joseph Frank Hyde, 30, pilfered the item from Diamond Adult World at 984 W. Grand Avenue and used force to get away from the store clerk. Hyde attempted to run over the worker with a motorcycle, escalating the theft to a robbery, according to the Grover Beach Police Department.

No one suffered injuries during the robbery. Soon after, officers recognized Hyde, as well as his motorcycle, from contact they had with him just prior to the robbery.

Hyde fled officers on the motorcycle, heading southbound on Highway 101. Officers chased Hyde for a few minutes but called off the pursuit when the threat to public safety became too great, police say. Authorities issued a “be on the lookout” to local law enforcement agencies.

At about 11:30 p.m., Atascadero police located Hyde and detained him without incident. Officers booked Hyde into the San Luis Obispo County Jail on charges of robbery, assault with a deadly weapon, felony evading police and various drug charges.

Hyde remains in custody with his bail set at $70,000, according to the county sheriff’s office website.