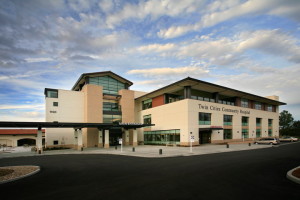 As part of a multi-state protest at Tenet Healthcare facilities, nurses will picket on Tuesday outside of Sierra Vista Regional Medical Center in San Luis Obispo and Twin Cities Community Hospital in Templeton.

Nurses have planned protests Tuesday outside of eight hospitals in California, as well as at Tenet facilities in Arizona, Florida and Texas in order to urge company management to improve conditions for nursing staff, a news release issued by the California Nurses Association (CNA) states. CNA nurses are in ongoing contract negotiations.

The protest at Sierra Vista Regional Medical Center is scheduled 12 p.m. to 3 p.m. Nurses will picket outside Twin Cities Community Hospital from 11 a.m. to 1 p.m.

Elsewhere in California, nurses plan to protest at hospitals in Modesto, San Ramon, Turlock, Los Alamitos, Palm Springs and Joshua Tree. CNA says, if Tenet were to to change its employment practices, it would improve the recruitment and retention of experienced registered nurses and ensure optimal patient care.

Tenet Healthcare is a multinational company based in Dallas, Texas that operates 65 hospitals nationwide and employs about 115,000 workers. It is one of the largest for-profit healthcare companies in the country.

The protest at Twin Cities Community Hospital follows several years of legal action Tenet and its Templeton facility have faced over alleged understaffing and overworking of nurses.

A 2013 California Department of Health investigation found Twin Cities was understaffed, in violation state-mandated nurse-patient ratios. In 2014, the state labor commissioner awarded a Twin Cities nurse $32,000 for missed breaks as a result of understaffing.

In 2015, a group of nine nurses filed lawsuits alleging Twin Cities was routinely understaffed and the hospital was skirting state law in order to increase profits. The following year, 53 nurses filed claims against the Templeton hospital, alleging widespread violations of California labor laws were still ongoing.