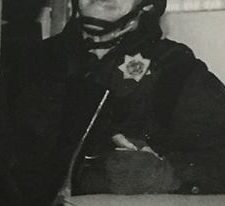 Officer Trevor Shipman kept his job with the Fresno Police Department after he shot and killed a man during a traffic stop over a seat belt violation. The family of the deceased man then filed a lawsuit for excessive use of force and Shipman left the department. He then applied for a job with the San Luis Obispo County Sheriff’s Department, and was hired.

Law enforcement officers accused of misconduct often keep their badges and move laterally to other agencies with the public unaware of their checkered pasts.

In Sept. 2015, while working for the Fresno Police Department, Shipman attempted to pull over Casimero Casillas because one of his passengers was not wearing his seat belt. Instead of pulling over, Casillas drove to a friend’s house and went inside, followed by Shipman.

Shipman, who found Casillas in his friend’s backyard holding a two inch pipe, shot and killed the 45-year-old father of five.

It’s here that witnesses and Shipman’s accounts vary. Shipman testified Casillas charged at him with the pipe at chest level, while he yelled at Casillas at the top of his lungs to stop. But Casillas’ two friends and two officers at the scene said they did not hear Shipman order Casillas to halt.

A decade earlier, in Dec. 2010, following a short car chase, Shipman shot 20-year-old Gerrick Franklin, a suspected carjacker, in the leg. Shipman opened fire when Franklin appeared to be reaching for a weapon. No weapon was found.

In the past few years, several lawsuits have been filed against local law enforcement agencies regarding officers who have been accused of sexual misconduct or excessive use of force.

On March 21, 2013, Jonathan Calvert, a then off-duty Long Beach police officer, attempted to detain a robbery suspect. While running from Calvert, Matthew Frushon took a cell phone out of his pocket. Thinking Frushon was armed, Calvert shot him in the back and in the elbow.

In late 2013, Frushon filed a lawsuit alleging civil rights violations, battery and negligence. On Oct. 21, 2015, the city and Calvert settled with Frushon.

In late 2016, Calvert resigned from the Long Beach Police Department and a few months later he was hired by the SLO County Sheriff’s Department.

On Jan. 24, 2017, deputies Calvert and Greg Roach shot and killed Josh Gallardo after pulling him over on Highway 101 in Atascadero because he was wanted for questioning regarding a domestic disturbance.

In early 2019, Gallardo’s wife filed a federal wrongful death lawsuit against Sheriff Ian Parkinson, his department and the two deputies.

The City of Paso Robles is also facing a legal challenge over the actions of an officer previously involved in a questionable shooting.

In 2009, McGuire shot and killed a man outside of a gym in Tulare. McGuire said the man had been tampering with cars in the parking lot, he mistook a cologne bottle for a gun, and shot the man as he fled. The family of the victim did not agree with McGuire’s narrative.

In 2012, McGuire resigned from the Porterville Police Department amid rumors he had an “inappropriate relationship” with a 15-year-old police explorer, according to SLO County Sheriff’s department investigation report.

In late 2012, the Paso Robles Police Department announced it had hired McGuire.

In 2018, multiple women accused McGuire of sexual misconduct, including rape, while on duty.

In Nov. 2018, the San Luis Obispo County District Attorney’s Office decided not to charge McGuire with sexual assault while on the job even though his DNA was found at the alleged victim’s home because the sex could have been consensual.

In 2019, a woman who was allegedly raped by McGuire filed a claim against the city, saying city employees were negligent in the supervision of McGuire, and in preventing the sexual assault.