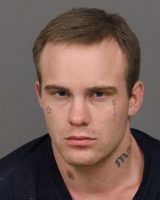 A reportedly suicidal man with a knife managed to run away from probation officers and sheriff’s deputies who were chasing him Tuesday evening, and authorities are still searching for the suspect.

Romo ran across Highway 101 into an area near Templeton Middle School. He was seen holding a knife to his throat and was considered to be suicidal, according to the sheriff’s office.

Authorities issued a precautionary 911 call to residents in the area instructing them to stay inside while officers conducted the search. Even though officers spotted Romo, authorities failed to track him down.

Romo was last seen wearing a multi-colored dress shirt, dark jeans and sunglasses. Romo is 5 feet 7 inches tall and weighs 140 pounds. He has tattoos on his face and neck.

Romo is not considered a danger to the public. Investigators are asking anyone who has information on his whereabouts to contact the sheriff’s office at (805) 781-4550.