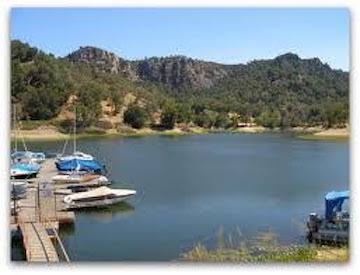 A Creston man momentarily lost consciousness and drove a truck into Santa Margarita Lake Monday morning, but managed to escape the submerged vehicle with a little help from a Good Samaritan.

At about 9 a.m., Todd Moore, 54, was driving a Toyota truck in the area of the Santa Margarita Lake campgrounds when he experience a medical episode and momentarily lost consciousness.

Moore’s vehicle drifted off the road and crashed into a metal gate and several wooden posts. The truck continued moving, and entered the water at a speed of about 45 to 50 mph.

A man who was camping nearby witnessed the truck enter the lake. The man launched his boat and positioned it next to the the window of the truck.

The truck became fully submerged with Moore still in the driver’s seat. After about 10 seconds of being underwater, Moore surfaced, and the man helped him to shore.

The only injury Moore suffered was a cut to his finger.