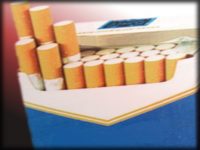 The Beverly Hills City Council formally adopted an ordinance on Tuesday that will prohibit the retail sale of tobacco products. [CNBC]

It is believed the move makes Beverly Hills the first city in the United States to enact such a ban. The prohibition on selling tobacco products applies to the retail sale of cigarettes, cigars, pipe tobacco, chewing tobacco and electronic cigarettes sold in gas stations, convenience stores, pharmacies and grocery stores. The ordinance exempts high-end cigar lounges and hotels.

Council members approved the first-of-its-kind ordinance on a 5-0 vote. The ban will take effect on Jan. 1, 2021.

“Allowing tobacco products to be sold in the city increases access to these harmful and dangerous products and does not promote the city’s image as a healthy city,” the Beverly Hills ordinance states.

Councilwoman Lili Bose said at Tuesday’s meeting that banning tobacco sales is in line with Beverly Hills’ reputation as a healthy place. Bose and Mayor John Mirisch said they expect other Southern California cities to follow suit with their own bans.

Years ago, the city of San Luis Obispo led the way with anti-smoking regulations, becoming the first city to ban smoking inside public buildings.

Some retailers opposed the Beverly Hills ban, arguing it would shift tobacco sales to nearby jurisdictions like Los Angeles and West Hollywood and that it would hurt small businesses in Beverly Hills.