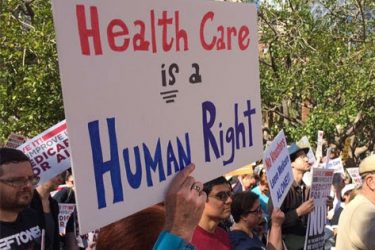 California’s Democratic-controlled Legislature has reached an agreement on extending government-funded health care coverage to young adult illegal immigrants at a cost of about $100 million a year, a plan Gov. Gavin Newsom intends to sign into law. [CBS News]

Democratic lawmakers on Sunday agreed on a proposed state budget that will allow adults between the ages of 19 and 25 who are living in the United States illegally to become eligible for California’s Medicaid program. In order to participate in the program, it will also be necessary for the young adults to have an income low enough to qualify for Medicaid.

The program will cost an estimated $98 million and cover an additional 90,000 people. It will be funded, at least in part, by the state levying a tax on Californians who do not have health insurance, a policy modeled after the scrapped Obamacare penalty at the federal level.

Prior to Sunday’s deal, the state Senate proposed legislation that would cover illegal immigrant adults ages 19 to 25 and 65 and older. An Assembly bill called for covering all illegal immigrants above the age of 19.

Newsom objected to the Assembly plan because of its $3.4 billion price tag. Ultimately, lawmakers agreed to Newsom’s $98 million proposal.

Following the compromise, California is set to become the first state in the country to offer government-funded health care to illegal immigrants.

Republicans on the legislative committee negotiating the budget voted against the plan, arguing it is not fair to give health benefits to illegal immigrants while taxing people living in the state legally for not purchasing health insurance.

The Legislature must still formally approve California’s proposed $213 million budgets. Lawmakers have until midnight on Saturday to do so or they forfeit pay.

In addition to providing health care to illegal immigrants, the proposed budget would also make California the first state to assist families earning as much as six times the federal poverty level with paying their monthly health insurance premiums. Families of four earning $150,000 a year would be eligible for about $100 a month in state government assistance under the proposed budget.

Newsom campaigned on a platform of universal health care. California has 3 million residents who do not have health insurance, about 1.8 million of whom are illegal immigrants.