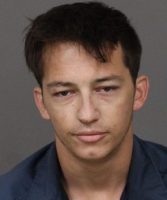 San Luis Obispo County Sheriff’s deputies caught an alleged burglar in Los Osos on Tuesday with a little help from residents circulating photos of the suspect on a neighborhood app.

At about 4 p.m., a thief burglarized a home in the 1300 block of Encinas Drive in Los Osos. A deputy arrived at the scene and spoke with the owners of the home, who said a room had been ransacked and money and medications were stolen, according to the sheriff’s department.

One neighbor shared a photo of the suspect and circulated it throughout the area using a neighborhood social network app. As the deputy was investigating the burglary and neighbors were sharing the photo, other deputies became involved in a foot chase nearby in the 2100 block of Ferrell Avenue. The deputies were chasing a man who matched the description of the burglar.

Deputies caught the suspect and arrested him. While searching the suspect, deputies found he was in possession of the property stolen from the Encinas Drive home.

The sheriff’s office is thanking the neighbors who shared photos and information that led to the apprehension of Hill. As of Thursday morning, Hill remains in custody with his bail set at $50,000.