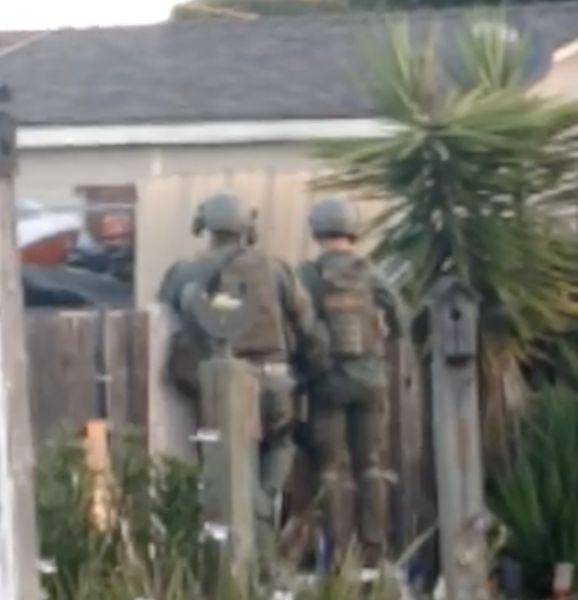 The search of a Grover Beach home Tuesday morning by SWAT teams and the bomb squad was part of an investigation into explosive devices that detonated in the South County city in February.

During the search, officers detained five individuals and cited one person for being under the influence of narcotics, according to the police. But, officers later released all of the individuals, and it remains unclear who is responsible for detonating the explosive devices.

At about 5:30 a.m., Grover Beach officers served a search warrant at a home in the 200 block of South 10th Street with assistance from the SLO County Regional SWAT team, the sheriff’s SWAT team and the SLO County Bomb Squad. SWAT officers climbed on the roof and went in the backyard of a neighbor’s home during the execution of the warrant.

On Oct. 15, 2018, a suspected destructive device was found at Grover Beach Elementary School. The device did not detonate. Officers retrieved the device and preserved it as evidence.

Then on Feb. 26, destructive devices detonated in the 100 block of South 9th Street and the 900 block of Ramona Avenue. No one suffered injuries in the explosions, and investigators obtained evidence from the two scenes.

Police then obtained a search warrant for a home located in close proximity to the locations of the devices. Grover Beach police deployed the SWAT teams and bomb squad out of an abundance of caution and in support of public safety concerns, police said.

An investigation into the case is ongoing. Investigators request that anyone who has information about the case contact Detective Nelida Aceves at (805) 473-4511 or nacaves@gbpd.org or anonymously call Crime Stoppers at (805) 549-7867.