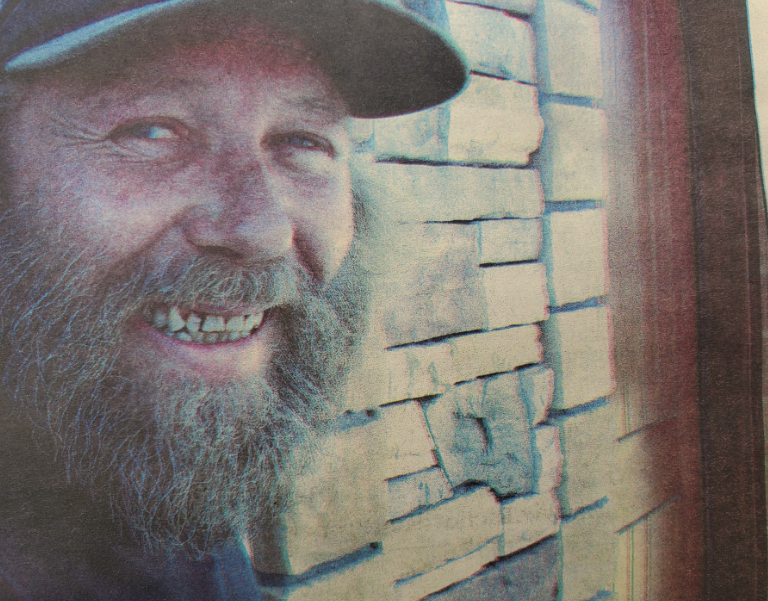 The Pirate has his own stool in the Schooner’s Wharf in Cayucos with his name engraved on a brass plaque that reads “Patron of the Year.” But everybody knows he is beyond such a meager title and is actually at the very top of the pantheon of who’s who in Cayucos, and should have the engraving changed to “Citizen of the Century.” Or maybe even a statue outside the establishment like famous athletes have outside sports arenas, for the Pirate, born and raised in Cayucos and now 62, is a living local legend of ever-shifting images.

The pirate’s stool is dealt with in a sort of reverence, like a shrine, and is always situated at the corner of the bar just as you come in. When the Pirate arrives for his own personal happy hour, which precedes the real happy hour, and somebody happens to be seated on his stool, they’ll quickly jump up as if royalty has arrived. Even if this royalty seems rather short, round, bushy-bearded, elfish, sweat-stained ball cap squashed upon a reddened merry Santa Claus face and merry perennially bloodshot eyes, plaster-stained sweatshirt torn at the shoulders to reveal the arms of a man who has been working nonstop since he was a child.

Almost always, the Pirate will shoo you back upon his stool, especially if it is occupied by a female, for the Pirate holds great sway with the ladies, almost all of whom adore his grungy, work-splattered being.

I first observed the Pirate back in 1989 during the July 4th Parade, which in those days was not a corporate creation of Fresno and Bakersfield fossils waving from antique cars, but mostly a bunch of hooligans partying on floats, followed by cowboys and cowgirls on horses that shit in the street, and hula girls shaking their fringed bottoms.

Anyway, the Cayucos Tavern had a float which was essentially a flatbed hauled by a truck. The flatbed was made up as a card parlor, and the Pirate, a young man in those days reputed to be the most artistic stone mason in the county, was on that flatbed, drunk, up all night and wired to the gills.

He somehow fell off the tail of the flatbed and while doing so completed a back flip and came up standing, yet missing the half pint of Korbel’s brandy that fell out of his back pocket and rolled to the crowd. A young boy picked it up and handed it to the Pirate, who bowed, handed the boy some candy, snatched his bottle and uncapped it, took a reassuring swig, recapped it and sort of zig-zagged back toward the float, where Tag Morely and friends pulled him up.

At that time, the Pirate was a fixture in the Cayucos Tavern, and owner Bill Larkin, who hired the Pirate to design the facades of both his bars (Camozzi’s in Cambria), paid him by erasing long held bar tabs. Also, if the Pirate put in a long night of drinking and passed out on the seating area at the back of the bar, Larkin allowed him to sleep it off and offered him coffee in the morning before the he set off to work as a plasterer. The Pirate never misses work no matter how hungover he is, and the Pirate, despite eating mostly meat and keeping long hours, is never sick.

The Pirate owns nothing but another of his long line of croaking pickups that warn you he’s coming from several blocks away. The Pirate owes nobody anything except his weekly bar tab, which is always paid off. Out on a ranch where the Pirate rents a small house and has tamed a feral cat, the Pirate grows veggies and often drops by friends in town to hand off squash, avocados, tomatoes, etc.

The Pirate was once a commercial fisherman and hunting guide and plays the guitar and had his own band, the Motowners. The Pirate has been smoking since childhood and his few remaining teeth show it. And, since he is a pirate, he swigs shots of rum with his Mexican beer and goes arrghhh!

I first got to know the Pirate up close and personal in 1992 when I was off work from my bartending job at Happy Jack’s Saloon in Morro Bay and boozing it up pretty forcibly on a night off in the Tavern, when I heard screams and scuffling back by the shuffle board.

The bar was packed, the music loud, but since I was in the area I drifted over and discovered two framers kicking the Pirate, who was on the ground, bloody of face, his left leg still weak from recently getting a cast off. So, wanting to be a friend of the Pirate, I ran at the scene and gave one fellow a running forearm football-style shiver to the jaw and proceeded afterward to park his friend beside him.

By this time, a few patrons came on the scene, and after that, as we pulled the raging Pirate to his feet, as he savagely cursed his attackers, who quickly fled, the sheriffs arrived. At the sight of the bedraggled Pirate, they sighed and shook their heads.

”You again,” one of them said.

“What happened?” asked the other officer.

I stepped forward and explained what had transpired. The officer looked aggrieved.

“Do you want to take responsibility for him?” he asked.

“No,” I answered. “I am barely responsible for myself.”

“Well,” said the officer. “We’re sick of throwing him in jail for drunk in public and other shenanigans. We don’t want the paper work. So why don’t you take him home.”

“If you tested me you’d have to jail me.”

“Look, he only lives half a mile from here in town. We’ll let it go if you take him off our hands.”

So I agreed to take the Pirate home. They watched me lead him to my 1976 Olds Cutless Salon with much duct tape and pile the unwilling, still very riled up Pirate, who wanted to find one of his several guns and shoot the cowards, into the front seat. He had accused them of stealing his tools.

At that time I was living with Miranda, two blocks from the Pirate. And at that time, Miranda was working at the liquor store several blocks down, halfway between the Tavern and our residences. So I stopped at the liquor store, ran in to inform Miranda that I had no idea how late I’d be home—she was getting off at 11, in five minutes–because the county sheriffs had put me in charge of the Pirate, whom they characterized in that wide open era as the Tasmanian Devil.

Well, when I returned to my car, it was gone. I set off in a mad sprint toward the Tavern. Just as I arrived, at least 20 people were sprinting out of the bar while the Pirate chased them swinging wildly with a baseball bat, a Louisville slugger, he’d obviously found in my trunk. There was screaming and roaring as drunks scattered. I reached the Pirate and said, calmly, “Gimme the bat, please.”

The Pirate complied. I ordered him to my car. He grumbling about wanting to get his gun and shoot the culprits who beat him and those who stood by and allowed it to happen. Once we reached his upstairs one bedroom apartment, I locked us in and the Pirate broke out some beers and a bottle when the sheriffs showed up and asked about the bat. I showed it to them. They said, “If we see that bat and that Tasmanian devil on the street again tonight you’re both going to jail.”

I promised it would not happen. We sat and talked about the stacks of detective novels the Pirate read, and his exploits, and drank, until he passed out in the wee hours, and from that point on we’ve been comrades for life. For he comes by several early afternoons a week, before hitting the Wharf, beeps, takes a while to get out of his work truck, finds a bag of dog biscuits, and, while Wilbur paces and drools, wings a couple biscuits up onto the deck and cackles as Wilbur instantly devours them.

I always thank him and vow to meet him at the Wharf and buy him a beer. Nobility must be honored.