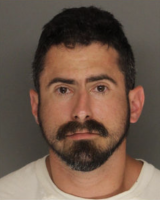 For the second time in the span of a week, the regional SWAT team came out to a Grover Beach home, arriving early Sunday morning to help arrest a man who allegedly tied up his female partner, beat her and threatened her with a gun.

On Saturday, Michael Paul Aldaco, 32, allegedly broke into the woman’s Orcutt home, then brandished a firearm, struck the victim multiple times and restrained her to a chair while threatening to seriously harm her. Aldaco also allegedly vandalized the home.

The victim managed to free herself and Aldaco fled the scene.

Shortly before 10 p.m., Santa Barbara County Sheriff’s officials asked Grover Beach police to help locate Aldaco, who was believed to have fled to a home in the south SLO County city. Officers found the suspect’s vehicle outside a home in the 1400 block of Atlantic City Avenue, police said.

Officers confirmed the suspect was inside the home. Aldaco refused to respond to the officers’ commands and exit the home, even as other occupants did so.

San Luis Obispo County Sheriff’s deputies, Arroyo Grande police and state parks rangers helped Grover Beach officers establish a perimeter and evacuate nearby homes. Authorities called in the SWAT team because Aldaco was believed to have been armed with a gun.