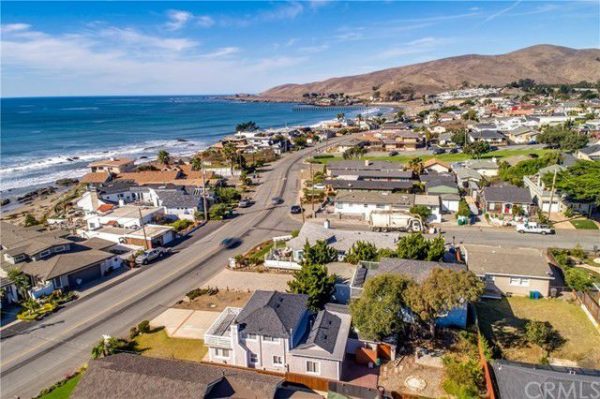 I ran into Richard just off the seawall yesterday morning around nine as he was returning from his walk on the pier. Richard is tall, slender, a little stiff in movement, a trifle hunched, wears glasses, sports a 1950s style mop of hair, is in his early 70s, and is highly educated.

At one time he was into a jogging regimen (in fluorescent sneakers) that involved at least 5 miles in a gait slower than my walk. Richard became a real estate agent about 25 years ago; and why I don’t know, because he is not particularly ambitious or money-crazed, but reasonably calm and personable almost all the time, a picture of consistency in a nerd’s grown-up suit. Though he doesn’t wear suits, no, just a plain shirt and plain pants and no tie.

Richard has a small office on the main drag, and another in Santa Barbara where he says it’s much easier to sell a house. He shuttles back and forth, and I would say, the best quality about Richard besides his honesty and compassion, is his appreciation of irony and sarcasm and especially absurdity; though unlike myself, he is in too serious a business to be an “absurdist” like me.

“I hear there’s eleven real estate offices in Cayucos these days,” I said, after initial salutations. I’ve known Richard from back in the days when I was a bartender in Morro Bay and he slummed with his ex wife, a bit of an adolescent hooligan in grown-up skin. Richard, never a boozer, is long-suffering to say the least.

“Probably more,” Richard said. “Lots of real estate agents in Cayucos, and not much to sell. What there is, is too expensive.”

“Oh yes. I’d say at least eighty per cent of the beach front homes along Pacific Avenue are empty almost all the time.”

“Not even for the Fourth and holidays.”

He shook his head. “You walk on the beach, and maybe a handful of homes have people enjoying them. Mostly they’re rentals.”

“And whole blocks where people used to live, where kids and dogs played, empty. Ghost streets, I agreed.”

“Pretty much. These people from the Valley have a lot of money. They build these Carmel-like mansions, up to 3,500 square feet, though they can cheat by claiming storage space. They pay gardeners and caretakers to keep them up, and they’re never lived in. And then they go up for sale for astronomical prices nobody can afford.”

“Well, you know I work with Dale.”

“He sells most of them. We work as a team. I do the writing.”

“Yes, you have to write up a house like it’s a person, or a personality. Make it attractive. You sit down and give it a script, and try and make it enticing as possible—like a movie trailer, say…making it beautiful…even if it isn’t, even if it has flaws…”

“Dale can’t be bothered, and he’s not one to do it anyway. Dale talks. Dale sells.”

Dale is the biggest real estate maven in Cayucos and one of the biggest in the county. Dale is the opposite of Richard. Dale seems hyperkinetic and has the cell phone out. Richard is never in a hurry and seldom on his cell phone. Even when you pass by Dale’s office and he’s at his desk doing nothing, he appears antsy, as if he’s about to jump up and do something earth-shaking serious.

He is a world class bullshitter about nothing and everything, while Richard is a bullshitter on just about any subject, for he reads and listens calmly while Dale has the attention span of a parakeet but knows what to say and can be entertaining. Above all, Dale really, really knows his business. Unlike Richard, who is a touch frumpy, Dale is perennially youthful and charismatic.

And Dale is impossible to dislike even if what he does for a living contributes hugely to the radical gentrification of Cayucos. If it wasn’t him, it would be somebody else, and I have come across a few reptiles in town, one woman in particular who appraises you as not worth bothering with if you don’t look like you can bankroll at least a mini mansion.

She wears suits and high heels and drives a late model sports car, and is married to a grinning geek. Her cell phone is almost always affixed to her ear, her face wreathed in concentration, worry, and greed. She is a handsome woman, utterly unappetizing.

Real estate agents are everywhere in Cayucos, like locusts. And since, like Dale, they are outgoing and sunny and engaging and wear constant smiles when it matters, which is most of the time, they are accepted and saluted in the streets. My friend and former mechanic, George Borque, who was flushed from town over rent hikes and bought a home in shabby Los Osos, blames Dale solely for the ruination of Cayucos and his own demise and would torture him before executing him if he had his way.

“So what’s going to happen?” I asked Richard. “I mean, that place on Park sold, right? It’s a monster. Nobody but a big family can move in there. Six bedrooms? So who buys it? Another zillionaire for a tax write off? Weekly rentals to whole clans? Or some retired fossil who’s going to share it with his fossil wife?”

Richard shrugged. “Who knows. Most families can’t afford to move here. So you don’t see as many kids as you used to.”

“You see old fat rich people with little dogs and little to do.”

“Someday, that’s all it will be, until they die and their kids sell the places to people like their parents, or knock them down and build these gross castles nobody can live in—like living in a fucking mausoleum in a cemetery.

Richard laughed. “Well, maybe it won’t be that bad. Hopefully not. Anyway, I’ve got to get going.”

Richard left, a slow shamble from the area off the pier to his office a few doors down.

On my way back with Wilbur, I passed Dale’s office. He saw me, raised a hand in greeting, jumped off his chair, grabbed a couple biscuits and, to prevent Wilbur from plowing into his office and inciting his dogs, fed Wilbur the goodies. We exchanged pleasantries, and then I moved on…

…but later that afternoon I passed by his office on the afternoon walk, and this time he handed me the biscuits in fear Wilbur would take his hand. He then started laughing and told me he thought one of my pieces about the radical gentrification of Cayucos in the Cal Coast News was hilarious.

“What do you think about the radical gentrification of Cayucos?” I asked.

“Well, it’s sad,” he confessed. “But it seems unavoidable.”

“Lots of people blame people like you, and specifically you, because you’re big.”

“So the full time rentals are shrinking, and the ones available are too expensive to rent.”

“Whole streets that used to have people in every house, are almost empty but for three or four, and sometimes one or two. Ghost streets.”

I didn’t want to press and torment Dale. His sunny disposition and readiness to bullshit and laugh eliminates most of the target. It’s a dirty job, being in the center of radically gentrifying one of the last affordable beach outposts in California. But I guess somebody’s got to do it. And get rich in the process.