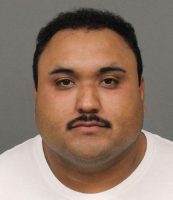 A San Luis Obispo judge sentenced a Paso Robles man on Tuesday to six years in prison for molesting a 12-year-old girl in 2016.

On June 6, following a two-week trial, jurors convicted Juan Antonio Esquivel, 31, of two felony counts of committing a lewd act on a child under the age of 14 and sexual penetration by a foreign object on a child under 14. Judge Jesse Marino sentenced Esquivel to two years fewer than the maximum punishment of eight years in prison.

The victim and her mother each made statements during Tuesday’s sentencing hearing. Following the hearing, District Attorney Dan Dow praised the victim in a statement issued to media.

“We admire the courage of this young victim in coming forward to report the abuse and to testify in court,” Dow said. “Sexual abuse of children is a predatory act that will always be pursued vigorously by our staff. We thank the jury for their service and are proud of the hard work of our entire prosecution team that ensured this victim’s voice could be heard and this offender could be held accountable.”

In the future, Esquivel will be required to register as a sex offender.