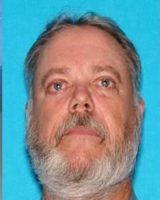 San Luis Obispo police are asking anyone who received an anonymous Hallmark card with a flag on it to call the the police department. The 62-year-old man officers arrested on Sunday for threatening to shoot minorities moving into his neighborhood, mailed his threats on Hallmark cards with American flags.

Early Sunday morning, local SWAT officers served a search warrant at Orcutt’s home in the 1300 block of Cavalier Lane. During their search of the homes, detectives found and seized several handguns, rifles, shotguns and thousands of rounds of ammunition, according to police.

Officers then booked Orcutt into the San Luis Obispo County Jail on three felony threat and hate crimes charges with his bail set at $500,000. Orcutt posted bail and was released from custody on Sunday.

Investigators are asking anyone who received one of the cards or knows someone who has to contact the police department.