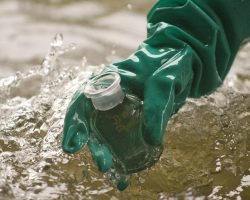 Amid statewide lead testing, excessive levels of the metal have been found in water at four San Luis Obispo County schools, with three of the violations being detected in water from drinking fountains. [Tribune]

In Pismo Beach, a pair of drinking fountains at Judkins Middle School were found to have lead levels of 20.4 and 95.1 parts per billion respectively, exceeding the threshold of 15 ppb set by the state, as well as the federal Environmental Protection Agency. In Paso Robles, two fountains at Bauer Speck Elementary School were found to have lead concentrations of 16 parts per billion, while a sink at Morro Elementary School in Morro Bay even more narrowly exceeded the threshold with a lead concentration of 15.2 ppb.

A drinking fountain at Templeton High School was found to have a lead concentration of 26 ppb. Water from the drinking fountain has since been resampled, and results are pending. In the other three SLO County cases, corrective action has been taken.

The California Legislature ordered the statewide lead testing in 2017. The tests took nearly two years, and results are still coming in.

State officials said this week the tests revealed lead in excessive concentrations in the water coming out of at least 291 drinking fountains, faucets and other fixtures at K-12 schools in California. Test results are available thus far for more than 33,000 fixtures.

Most of the contaminated fixtures have been fixed or removed.

The nonprofit Environmental Working Group said the lead problem is significantly more widespread than state officials claim publicly. The group said it was told by state officials that, using a stricter standard of what is allowable, excessive lead turned up at 1,166 schools out of 6,595 schools that have reported test results so far.