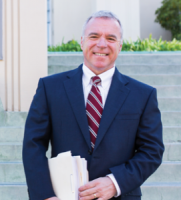 A San Luis Obispo judge has ruled a new California law that could free accomplices to murders from prison is unconstitutional and amounts to an encroachment by the Legislature upon the powers of the state’s judicial branch. [Tribune]

SB 1437 says that a person can only be convicted of murder if he or she was the actual killer, aided the killer or was a major participant in the underlying felony and acted with reckless indifference to human life.

Thus far, 18 people have petitioned for re-sentencing in SLO County under SB 1437. In two local cases, the judge found the men were the actual killers and denied the petitions.

In another six cases, judges Jacquelyn Duffy and Craig van Rooyen heard arguments and then found SB 1437 to be constitutional.

But last week, Judge Tim Covello issued a ruling in a local petition for re-sentencing case that SB 1437 is unconstitutional. Covello, who as with Duffy and van Rooyen is a former local prosecutor, issued the ruling on June 27 in the 28-year-old murder case of John Louise Palmer.

Palmer was 17 years old when he pleaded guilty to second-degree murder in 1992 over the fatal stabbing of his grandmother, 67-year-old Roxana O’Grady, which occurred during a burglary at O’Grady’s Cayucos farmhouse on Toro Creek Road. Palmer was part of a group of three co-defendants who burglarized the home.

During the burglary, one member of the group stabbed O’Grady, according to Palmer’s testimony.

Following his conviction, Palmer, now 44, received a sentence of 15 years to life, which he had been serving at Mule Creek State Prison in Ione. He was recently transferred to the California Men’s Colony to be close to the location of his court hearings.

Covello stated in his ruling that the new law violates the will of the voters in the 1978 Proposition 7 and 1990 Proposition 115, which respectively increased penalties for murder and added crimes applicable to a murder charge. Additionally, Covello stated SB 1437 violates California’s separation of powers by allowing the legislature to interfere with the judiciary.

SB 1437 would require the court to conduct a quasi-appellate review of a person’s conviction or force the prosecution to prove the case beyond a reasonable doubt long after the crime was committed and the final judgment entered, Covello wrote. Covello further stated, in a case like Palmer’s that involved a plea bargain, there is no trial record for prosecutors to go on, so they cannot prove whether Palmer actually participated in the killing, was the mastermind, supplied the weapon or had intent to injure or kill.

“When a legislature mandates a court to set aside a lawful plea bargain, vacate a 27-year-old judgment, re-adjudicate that controversy under an entirely different legal standard, and then further mandates an unconstitutional process for that re-adjudication, they have arrogated unto themselves the core functions of the court, and materially impaired the proper functioning of the judicial branch,” Covello wrote in his ruling. “If this is not a legislative encroachment upon the authority of the judicial branch in violation of the separation of powers clause of the California Constitution, this court can think of no legislative action that would constitute such an encroachment.”

Palmer’s attorney said his client and his family are very disappointed with the denial of the petition for re-sentencing and would appeal it, though they respect the judge’s ruling. Hearings in the remaining murder petition cases will continue over the coming months.

The matter of the constitutionality of SB 1437 is expected to make its way through California’s court system and end up before the state Supreme Court.