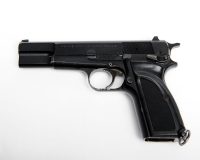 Lompoc police are investigating a shooting that occurred early Friday morning and resulted in an extremely drunk man suffering a bullet wound to his hand. [KCOY]

Shortly before 3 a.m., it is suspected the shooting occurred at the intersection of Oak Avenue and F Street. After the shooting, officers arrived at the Lompoc Valley Medical Center and found an extremely drunk 21-year-old man who had suffered the gunshot wound.

Police say the man refused to answer any questions about what happened. Anyone who has information about the shooting is asked to call the Lompoc Police Department at (805) 875-8155.

Since March, there have been five homicides in Lompoc, with the most recent murder being a deadly shooting that took place late Sunday night.