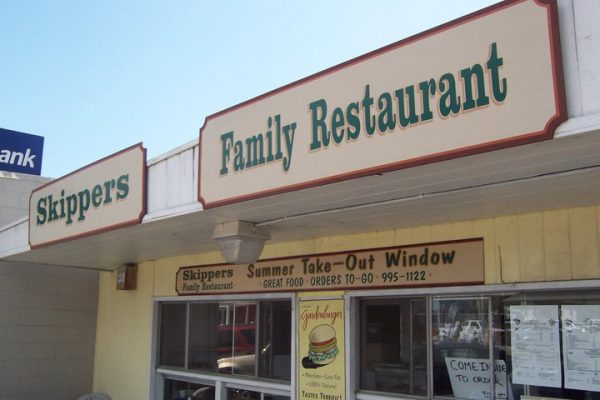 When I first moved here back in 1989, Skippers, which is directly across the street from the Cayucos Tavern, stayed open early evenings and did a consistent stop and start business. An old fashioned-diner or cafe, one could call it a greasy spoon.

Traditional hearty American breakfasts were served in the morning, including chicken fried steak and eggs and biscuits and gravy, and the usual burgers at lunch, and at dinner back to the chicken fried steaks with fries and salad, a stick-to-the-ribs meal for one of the several cowboys who drank after work in the Tavern, their dusty, dirt-caked pickups with cow dogs in beds parked out front. Yeh, there were a bunch of working cowboys in town in those days.

One of those cowboys was strapping Charlie Mitchell, a Cayucos and countywide legend who could have played pro football for the San Francisco 49ers at 21, and later owned the notoriously rowdy fisherman’s dive Happy Jack’s in Morro Bay. Charlie was a familiar figure as he sat in his truck in the south lot looking out at the sea while munching a Skippers’ bacon and egg sandwich, a ritual that probably ended up killing him of a stroke.

In those days, besides cowboys, there were a lot of working-class blue-collar locals who survived on the big greasy bunkhouse breakfasts of home fries or hash browns, sausage, ham or bacon, eggs, biscuits and gravy and toast, packing it in, fuel for the grind awaiting them. 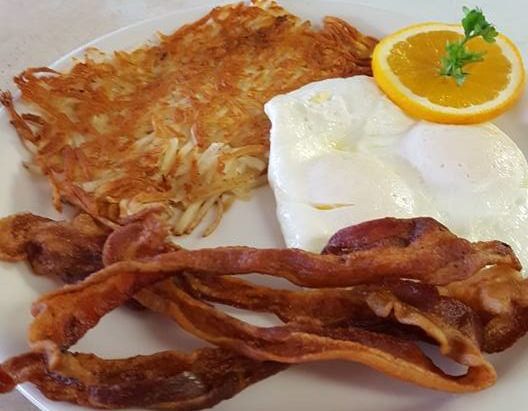 Today, those days are over; Skippers is closed for business. Most of the people living in Cayucos won’t go near such tantalizing spreads, the aromas of frying bacon wafting out the windows of Skippers and filling the main drag.

Nowadays, another old breakfast spot that specialized in pancakes, has for years been Cayucos Coffee, where every kind of latte and espresso, besides redolent coffees, are served, along with Chai, frappes, gluten free granola, organic this and that, and fresh baked goods.

I don’t see any of the regulars hanging out there in the market for a generous steaming hunk of pork sausage or four links nestled next to two over-easy eggs and a slew of home fries while browsing a newspaper. Instead, we have folks, computers out, along with smart phones, or swathed in head phones, pouring over urgent messages or nonsense while nibbling on something far from what killed Charlie Mitchell, who was perhaps the most esteemed brawler in the county, the kind of guy who picked you up after parking you on your ass and invited you back into the bar or tavern for a shot and a brew.

The only place now to get any semblance of a godforsaken yet irresistible heaven-sent authentic beloved greasy spoon bunkhouse breakfast is Bill Shea’s Sea Shanty. Though over the years they have garnished their breakfasts with fruit and melon wedges, definitely an addition Charlie Mitchell, Bobby Rosa and Henry Peterson—just a few of the many cowboys now gone—would have scorned. 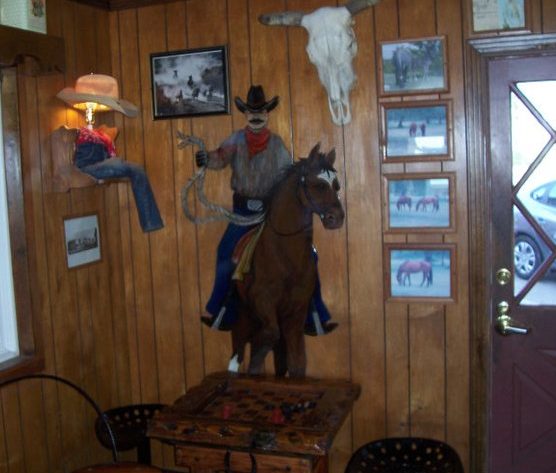 Even more sumptuous than the low rent comfort food in Skippers was their trademark soft serve ice cream in cones or cups, by choice dipped in hot chocolate like the Old Frosty Freeze in Morro Bay, to which tourists flocked like pigeons on the pier scattering for Skippers French fries.

Designer ice cream, which can be found in another shop in Cayucos, was never going to happen in Skippers. And I’m not sure they even took credit cards, for back on the patio among the tables and chairs that offer a view of the ocean, a sign still warns in red letters not to try paying with a credit card.

Over the last few years–and it might be even longer–Skippers ceased serving dinner and closed at 2 in the afternoon, after the limited burger rush. Walking past the joint with Wilbur in the mornings, its old time naugahyde booths were mostly empty, and the local girls who worked there seemed as sad as a dying business can get.

Decades past, almost every girl who worked there on the morning and afternoon shifts went directly across the street to the Tavern after checking out for the dollar shots of Jack Daniels and draft beers. Usually a regular bought them their first rounds.

The cowboys and the house painters and framers and construction grunts of every ilk were all there, along with a few white-collar slaves. Skippers was bare bones Americana, the kind of place you found in almost every small town in the country.

I admit I haven’t been in there in years, for I ceased those big greasy breakfasts that lay in your stomach like a bowling ball and get you to belching all morning; they went away with the bad hangovers they served so well over the years, plus several refills of coffee and water. I remember settling into a booth in Skippers, LA Times at the ready, waiting for the spatula maven in the grease pit to drop my steaming plate for the waitress. I remember flopping the over-easy eggs atop the potatoes and cutting them up so that the yolk seeped into the potatoes and created a kind of goulash, and sprinkling on the salt and pepper, and going slowly, savoring each bite, cutting into the sausage and saving half of it for last, and then mopping up every speck of yolk and grease with buttered toast until nary a drop remained.

And I remember sitting in my car in the south lot and honking at Charlie Mitchell beside me in his truck, the legend waving exuberantly at me as he chomped on that great simple sandwich and thinking, that goddam thing is gonna kill him, so I’d better keep on suffering with a good sour dough fried to a crisp in butter and olive oil, and a cup of home brew.

R.I.P., Skippers. And please don’t become one of those places serving craft beers and organic pretzels. It was bad enough they conceded to serve garden burgers the last few years.