San Luis Obispo Obispo Police Chief Deanna Cantrell left her gun in an El Pollo Loco restroom stall on Wednesday, after which it was promptly stolen, and the police department is now asking for help from the public in retrieving its chief’s firearm.

Cantrell was eating lunch at El Pollo Loco on Los Osos Valley Road at about noon when she went to the restroom and inadvertently left her personal firearm in the stall, according to police. In a video published on the city’s YouTube channel, Cantrell gave her account of what occurred.

“Even though my gun was in a holster, it didn’t stay clipped to my pants, so I removed it, and I placed it next to me,” Cantrell said in the video statement. “I left, and I left my firearm in the restroom. Within minutes I realized it, but when I went back it was gone. Someone had stolen it.”

Cantrell said she immediately checked surveillance footage and saw three people had entered the restroom after her. The first person to have entered the room after her is a man suspected of picking up and leaving with Cantrell’s gun. 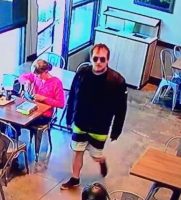 The man remained in the restroom for about two minutes and then left through the same entrance where he entered the restaurant, which is near the Dicks Sporting Goods parking lot, police said. The news release describes the suspect as balding, wearing a black jacket, lime green and blue striped shorts and sunglasses.

The police department is circulating surveillance images of the man on Facebook. He was last observed on Los Osos Valley Road at about 12:15 p.m., according to the Facebook post.

After the man left the restroom, a boy about 10 years old entered the bathroom and left, followed by another man. Both the boy and the man who followed him were still in El Pollo Loco when Cantrell returned. The boy and the man were each questioned, and neither reported seeing a firearm, according to the city.

“My actions were irresponsible and dangerous, and I am so grateful that, after our preliminary investigation, a child didn’t find it,” Cantrell said in the video statement. “I was complacent, and that is something you can never be with a firearm. I expect more from myself as a person and especially as a police officer that has carried a firearm for 25 years.”

Cantrell said the incident was immediately reported to her supervisor and law enforcement, and the gun was entered into a national database.

“I expect to be held accountable, and I want to publicly apologize for my carelessness, and I hope that in some way this serves as a lesson for others.”

City Manager Derek Johnson said he spoke personally with Cantrell and that she apologized for the mistake and voluntarily agreed to attend training on firearms safety practices. Cantrell also vowed to use the incident as a training opportunity for all SLO police officers, Johnson said.

Johnson did not mention any sanctions Cantrell might face.