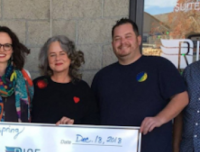 Following the lead of Grover Beach and San Luis Obispo, the city of Morro Bay has awarded one of its marijuana dispensary permits to Natural Healing Center, a business owned by local pot mogul Helios Dayspring, a political donor to multiple council members.

Morro Bay’s marijuana ordinance only allows for two pot shops to operate in the city. Under the ordinance, Morro Bay’s city manager selected the two recipients of the pot shop permits following a recommendation by a committee.

Natural Healing Center currently operates a dispensary in Grover Beach and is in the process of opening a San Luis Obispo location. The permit awarded for the Grover Beach dispensary has been the subject of pay-for-play allegations centered around Dayspring and a former mayor of the South County city.

Likewise, the city of SLO has been criticized for awarding two of its dispensary permits to major donors to the mayor and a pair of councilwomen. Last October, Dayspring and Natural Healing Center hosted a fundraiser for eight local politicians, including three current members of the SLO City Council and now-Morro Bay Mayor John Headding and now-Councilwoman Dawn Addis.

The employees of Natural Healing Center and Perfect Union must still pass background checks prior to the businesses receiving their Morro Bay operating permits.