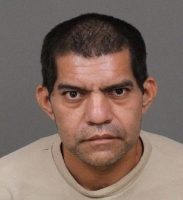 A man who had been on the run in Mexico for nearly six years until recently being caught and extradited to San Luis Obispo County can stand trial for a 2013 Paso Robles murder, a judge ruled on Thursday.

David Rodriguez Hernandez, 43, faces charges of murder, conspiracy to commit kidnapping, robbery and assault with a deadly weapon. At the conclusion of a three-day preliminary hearing, San Luis Obispo Judge Jacquelyn Duffy ruled enough evidence in the case exists in order for Hernandez to stand trial.

Hernandez escaped to Mexico with his wife following the Feb. 2013 killing of 37-year-old Victor Sanchez, who fell victim to a jealous lover’s plot that unexpectedly turned fatal. The jealous lover, Maria Fajardo, was convicted in Dec. 2014 of second-degree murder in the death of Sanchez, who was her ex-boyfriend.

Fajardo allegedly paid Hernandez to have Sanchez brutally injured on multiple occasions after he became entangled with other women. In one instance, assailants beat Sanchez with a tire iron, leaving him hospitalized with broken bones and facial injuries.

Then in Feb. 2013, assailants tasked with shooting Sanchez in the knee ended up killing him. Investigators alleged that Hernandez participated in both attacks and recruited three teens to shoot Sanchez.

After the assailants ended up killing Sanchez, Hernandez fled to Mexico with his wife, Christine Garner. Mexican authorities arrested Garner, but Hernandez evaded capture until this year.

Garner, who was convicted of multiple crimes in the case, testified during Fajardo’s trial in exchange for a reduced sentence of 21 years to life in prison. Garner said that Fajardo paid her and her husband to injure Sanchez on two occasions. Fajardo was unsatisfied with the damage inflicted in the initial attack on Sanchez, so she paid to have him shot in the kneecaps, Garner testified.

In early 2019, Mexican authorities caught Hernandez, and several law enforcement and immigration agencies teamed up to have him extradited to San Luis Obispo County. Hernandez was booked into the SLO County Jail on Jan. 30.