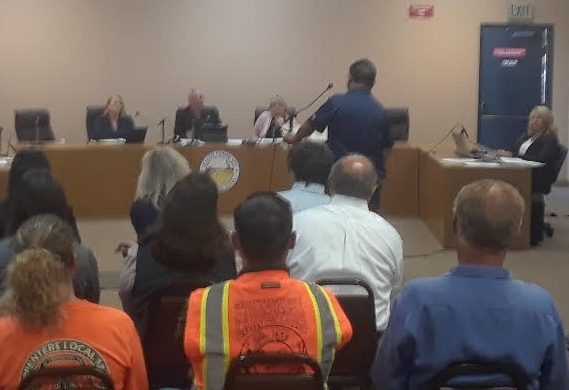 Amid allegations large donations from several unions were swaying their decisions, on July 18 two members of the South San Luis Obispo County Sanitation District board voted to require the use of local union members to construct an estimated $28 million redundancy project. A vote that has put a low interest government loan in jeopardy and likely increased the cost of the project.

During a standing-room only meeting, labor union representation voiced their support of the project labor agreement while several construction firms and builder advocacy groups noted their opposition.

During the last election, labor and union groups donated $7,700 to Lee and $4,500 to Ray-Russom. Austin received no donations from labor or union groups.

“I have always supported labor, I am labor, I’m a teacher and I’ve been doing public service for nearly 15 years,” Ray-Russom said. “I’m not gonna make apologies for the fact that I have tremendous support.”

Lee mentioned the public has also questioned him about his donations from cannabis business owners. After Cal Coast Times reported Lee had failed to properly report a donation from marijuana kingpin Helios Dayspring, Lee amended his filing and legally claimed the donation.

“Yes, I did take campaign contributions from many people, some of those included labor organizations.” Lee said. “I’m not going to apologize for that. I’m a union member, as well, in my professional life, but I’m also a professional engineer, and so I do understand the local hire provisions.”

Both Ray-Russom and Lee admitted the agreement will likely drive the project price up.

Austin argued repeatedly, that the agreement would lead to lawsuits and less competition, further driving up costs. On a 2-1 vote, with Austin dissenting, the board then voted to approve the agreement.

“I’m doing what’s best in the interest of the district,” Austin said.

During the meeting, several opponents of the project labor agreement argued that it would end the districts chance of receiving a USDA low-interest loan expected to cover 18 percent of the project’s costs.

“The non-federal entity must conduct procurements in a manner that prohibits the use of statutorily or administratively imposed state, local, or tribal geographical references in the evaluation of bids or proposals…,” said Eric Christen, the Coalition for Fair Employment in Construction executive director. “In our legal council’s opinion, applying the proposed project labor agreement to the redundancy project would render it ineligible to receive federal funding. Please be advised that we have a letter ready to go to the USDA if you proceed with the agreement.”

One Comment about “Sanitation district votes to require union labor”