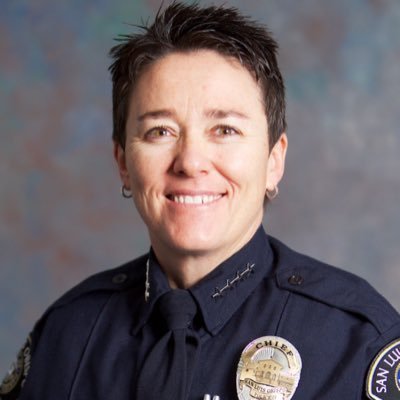 Clarification: The chief left her personal weapon, a Glock 42 which holds six rounds, in the restroom and not her department issued gun. Sean Greenwood called the SLO Police Department at 7 p.m. on July 11 to report he had the chief’s gun.

The search for the pistol that San Luis Obispo Police Chief Deanna Cantrell lost in a bathroom stall resulted in an apparently illegal search of a home without a warrant and the arrest of a couple on charges of child neglect for having a messy house. And, new information points to Cantrell’s efforts to keep the news of her loss quiet despite her claim that she immediately reported the stolen gun.

Cantrell left her pistol, a Glock with a 6-round magazine, in the bathroom of an El Pollo Loco restaurant about noon on July 10. A short time later, Cantrell realized she did not have her weapon and returned to the restaurant bathroom. The pistol was not there.

In contrast to San Luis Obispo Chief Deanna Cantrell’s claim that she immediately reported her gun stolen, several officers said her attempt to cover-up the theft of her gun risked officer safety and led to the search of the home of a man incorrectly identified as the person suspected of taking the chief’s gun.

Typically, after a loaded police firearm is stolen, a be on the lookout (BOLO) is put out to area law enforcement not only to help quickly recover the stolen weapon, but also to protect officer and public safety.

However, for the first two hours, Cantrell conducted the investigation into her stolen gun without reporting the theft. Cantrell checked surveillance footage at the restaurant and saw that three people had entered the restroom after her, two of whom were still in the restaurant and did not have her gun, Cantrell said.

Two hours after Cantrell discovered her gun was missing, she called police dispatch and asked police department employee Christine Steeb to call her back, cell phone to cell phone, in an apparent attempt to keep the call from being recorded, said a SLO police officer, who asked to remain anonymous to protect his employment. Steeb said the chief provided information about her lost gun on a non-recorded line because of issues with the city’s phone system.

“The call fell off so I called her back on my cell phone,” Steeb said. 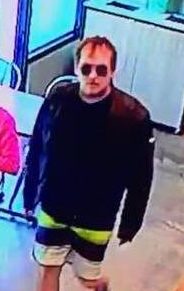 The last person, who was the first to enter the restroom after Cantrell left, was not in the restaurant when the chief returned to look for her firearm. The man, later identified as 30-year-old Skeeter Carlos Mangan of Los Osos, was shown in the video –  clean-shaven, balding and wearing a black jacket and shorts.

Shortly before 7 p.m., a group of five detectives were dispatched to a home on O’Connor Way after an officer said a man who lived in the home resembled the man in the video. Even so, the dispatch log shows the officer were sent to El Pollo Loco on Los Osos Valley Road for a lost property report.

The group of police drew the attention of a man living in the house with his wife and two children.

The man, who is not being identified by CalCoastNews, came out to ask the officers what was going on. The man had a full beard and mustache.

Even so, detectives Jason Dickel and Suzie Walsh told the man that they knew he had stolen the chief’s pistol and ordered him to tell them where it was, the man said. He told the officers he had been in Atascadero with his wife and two children at a medical appointment and that he had not been at El Pollo Loco in SLO.

The man’s wife and the couple’s two daughters also came out of the house and spoke with officers. The wife said she offered to call the doctor so he could confirm they were in Atascadero at the time the gun was stolen, but the detectives said no. The wife said she heard several officers noting her husband clearly was not the clean-shaven man seen in the video.

Walsh then asked the man if she could search his home. He asked if she had a warrant.

“Jason Dickel said I was on probation and he did not need a warrant,” the man said. “I told him I had court documents showing it was another family member who was on probation, but he did not want to see the documents. He said ‘you have the gun and we are going in to get it.’ ”

After the officers entered the house and kicked down the parents’ bedroom door, they arrested the man and his wife on charges of child neglect. The house was unclean, officers said, and they took the children into county custody. The girls, 7 and 9, remained in the police station until after 2 a.m. the next day, the man’s wife said.

In support of removing the children from their parents’ custody Carrie Bailey, a county social worker, claimed a photograph taken in the parents’ bedroom of paraphernalia was taken in the children’s bedroom. When asked about the misstatement, Debra Barriger, a deputy county counsel, said the county is not permitted to disclose child custody issues.

At 7:30 p.m., more than seven hours after the chief’s gun was stolen. SLO police patrol officers were notified for the first time that the chief had lost her gun, a patrol officer said.

In contrast with Cantrell’s timeline, SLO County Sheriff Chief Deputy Aaron Nix said that between 8 p.m. and 9 p.m. on July 10, SLO Police Department employees requested the sheriff’s department  assist them in finding the gun. A sheriff watch commander then asked why they had not informed area law enforcement through a BOLO alert, and gave SLO police dispatch a 30 minute window to send out an officer safety BOLO alert to area law enforcement.

“We inquired as to whether they intended to put out an Officer Safety BOLO,” Nix said. “SLOPD Dispatch advised they did intend to send out a BOLO and we offered to assist them in that regard. We told them we would re-contact them in about a half an hour to check on their progress, and we later confirmed they had in fact put out the BOLO.”

At approximately 7 p.m. on July 11, Mangan’s brother-in-law Sean Greenwood called the SLO Police Department to report he and Mangan had the chief’s gun, Greenwood said. Cantrell then sent officers to Los Osos to retrieve the firearm.