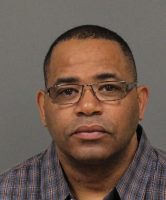 The suit details the incident in which a Lyft driver allegedly raped the Nipomo woman.

“After being dropped off at Jane Doe’s home around midnight by a Lyft driver, Jane Doe woke up the next morning in her bed bruised, naked and bleeding from her intimate private parts,” the lawsuit states. “The entire assault by the Lyft driver was captured on a home surveillance system, amounting to approximately 30 minutes.”

On Nov. 4, the Nipomo woman was intoxicated when she stepped into a Lyft vehicle driven by Lompoc man Jason Fenwick, 52. She had blacked out by the time they arrived at her home, where she was escorted inside by Fenwick.

Fenwick placed her in bed and then wandered around the house, snooping and checking for other occupants and closing curtains. He was oblivious to the home surveillance system that was recording his very action, according to the lawsuit.

The Lyft driver proceeded to “fondle, paw, kiss, molest and disrobe” the woman. Eventually he removed her underwear and performed oral sex and penetrated her, according to the lawsuit.

During the sexual assault, Fenwick took several breaks to surveil the inside of the home. He also took several photos of himself with the unconscious woman.

After the assault, Fenwick grabbed the woman’s phone and used it to leave himself a $20 tip for the Lyft ride, the lawsuit states.

On Nov. 8, SLO County sheriff’s deputies arrested Fenwick on charges of oral copulation with an intoxicated victim, sexual penetration with a foreign object, using a device to see through clothing and burglary. Fenwick remains in jail with his bail set at $500,000.

According to the suit, Lyft has high driver turnover and rushes to fill driving positions. Lyft’s high demand for drivers and inadequate background checks result in the hiring of dangerous drivers and drivers with criminal records.

McKiernan has suggested that Lyft could monitor its drivers through an app currently used by customers to track drivers in order to monitor the amount of time drivers spend at the homes of their riders. Lyft employees could then call both the client and the driver to determine a reason for the delay in leaving the drop off point, McKiernan said.