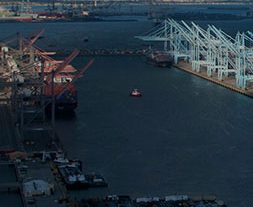 A federal grand jury indicted a Chinese company on Tuesday for allegedly conducting a complex financial fraud scheme to avoid paying tariff’s on huge amounts of aluminum it exported from China to ports in California.

The company allegedly disguised extruded aluminum as “pallets” to avoid customs duties of up to 400 percent – and “sold” the purported pallets to related entities to fraudulently inflate the company’s revenues and deceive investors around the world. The aluminum was imported through the ports of Los Angeles and Long Beach and then stockpiled at four large warehouses in Southern California,

The 53-page indictment alleges that China Zhongwang Holdings Limited, Asia’s largest aluminum extrusion company; Zhongtian Liu, the company’s former president and chairman; and several individual and corporate co-defendants lied to U.S. Customs and Border Protection to avoid paying the United States $1.8 billion in anti-dumping and countervailing duties that were imposed in 2011 on certain types of extruded aluminum imported into the United States from China.

The aluminum sold to United States-based companies controlled by Liu were simply aluminum extrusions that were spot-welded together to make them appear to be functional pallets, which would be finished goods not subject to the duties, according to the indictment. In reality, there were no customers for the 2.2 million pallets imported by the Liu-controlled companies between 2011 and 2014, and no pallets were ever sold.

Liu and his co-defendants orchestrated the bogus sales of aluminum to Liu-controlled companies in Southern California to falsely inflate the value of China Zhongwang, according to the indictment. Liu is a major shareholder of China Zhongwang, which has been listed on the Stock Exchange of Hong Kong since a 2009.

After the duties were put in place in 2011, the company’s annual reports created a false narrative that there was a robust demand for the aluminum pallets in the United States, according to the indictment. Because there was no such demand for the pallets, the indictment alleges that “defendants Liu and China Zhongwang would direct that aluminum melting facilities be built and acquired to be used to reconfigure the aluminum imported as pallets into a form with commercial value.”

The indictment also alleges a massive money laundering scheme that was used by the defendants to funnel hundreds of millions of dollars through shell companies to the U.S.-based aluminum companies controlled by Liu. The funds were then transferred to China Zhongwang and the other shell companies as payments for the aluminum.

“This indictment outlines the unscrupulous and anti-competitive practices of a corrupt businessman who defrauded the United States out of $1.8 billion in tariffs due on Chinese imports,” said United States Attorney Nick Hanna. “Moreover, the bogus sales of hundreds of millions of dollars of aluminum artificially inflated the value of a publicly traded company, putting at risk investors around the world. The rampant criminality described in this case also posed a threat to American industry, livelihoods and investments.”

The defendants named in the 24-count indictment:

·         Zhongtian Liu, 55, a billionaire Chinese citizen, who for a time maintained a residence in Tustin, and who is the former president and former chairman of the board of China Zhongwang;

·         China Zhongwang Holdings Limited, the publicly traded aluminum company based in Liaoyang City that was the largest aluminum extrusion manufacturer in Asia and the second-largest in the world;

·         Zhaohua Chen, 60, a Chinese national and close friend of Liu, who allegedly was a key player in the scheme;

·         Xiang Chun Shao, also known as Johnson Shao, 58, most recently of Irvine, who managed a collection of Southern California businesses that pretended to be independent third parties importing the Chinese aluminum;

·         the Ontario-based Perfectus Aluminium Inc., which was controlled by Liu and managed by Shao;

·         Perfectus Aluminum Acquisitions, LLC, a subsidiary of Perfectus Aluminium formed in late 2014 to take over a string of companies that had received aluminum pallets shipped to the U.S. after the duties were imposed on Chinese aluminum in 2011; and

·         four LLCs controlled by Liu that were established to purchase warehouses in Riverside, Ontario, Irvine and Fontana where the aluminum pallets were stockpiled.

At this time, none of the individual defendants named in the indictment – Liu, Chen or Shao – are believed to be in the United States.

In a separate case filed late Tuesday, an associate of Liu, Po-Chi Eric Shen, 41, of Los Angeles, was charged with failing to report to the Internal Revenue Service more than $9 million in taxable income he received in 2015. Shen has agreed to plead guilty and cooperate with the government’s ongoing investigation in this matter.

“Tariffs are a tax on imports. Importers are expected to check the tariffs and other taxes and duties due on the goods they bring in, calculate what they owe, and pay it,” said IRS Criminal Investigation Special Agent in Charge Ryan L. Korner.

In September 2017, the United States Attorney’s Office filed civil forfeiture actions against the four Southern California warehouses used by Perfectus to store the pallets. In February 2018, the government filed a fifth civil forfeiture complaint against “approximately 279,808 Aluminum Structures in the Shape of Pallets,” about half of which were seized in early 2017 at the Ports of Los Angeles and Long Beach, and the other half were seized from three other warehouses Perfectus was using to store the pallets.

The indictment announced today charges all of the defendants with conspiracy, nine counts of wire fraud and seven counts of passing false and fraudulent papers through a customhouse. All of the defendants, except the warehouse entities, also face seven counts of international promotional money laundering. If they were to be convicted, the individual defendants would face a statutory maximum penalty of five years in federal prison for the conspiracy charge and up to 20 years for each of the remaining 23 counts. If the companies were to be convicted, they would face substantial monetary penalties.