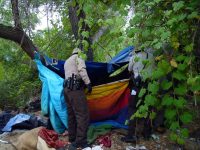 San Luis Obispo County’s homeless population spiked by 32 percent between 2017 and 2019, according to a newly released county report.

This January, officials counted 1,483 homeless individuals in SLO County. In 2017, the county’s homeless population was 1,125.

County Homeless Services Coordinator Laurel Weir said in a statement that an increase from the 2017 total was expected because, two years ago, heavy rains impacted the count.

“We expected some increase because heavy rains in 2017 would have caused more people to seek shelter rather than remain in riverbeds and other waterways where they normally would have stayed,” Weir said. “Local agencies also reported an average increase in the number of homeless persons seeking assistance. Many similar communities across California are also seeing a rise in homelessness.”

Among the county’s current homeless population, 79 percent are unsheltered and 21 percent are sheltered. The county says 298 of the individuals are considered chronically homeless.

There are currently 67 homeless families in SLO County totaling 222 individuals, according to the report. Likewise, there are 23 unaccompanied homeless children, all of whom are unsheltered.

The city of SLO has the largest homeless population among cities and communities in the county. Most of SLO County’s homeless who were surveyed are either from the United States or have a connection to the area, according to the county.

One Comment about “SLO County sees spike in homelessness”