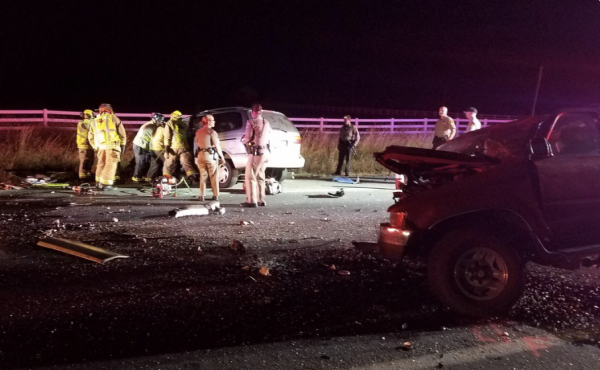 A man allegedly driving under the influence Saturday night veered into oncoming traffic on Los Osos Valley Road in San Luis Obispo, colliding with one vehicle and crashing head-on into an SUV, the driver of which was ejected and suffered major injuries.

At about 10:30 p.m., 20-year-old Lompoc man Daniel Pooler was heading eastbound in a Toyota Sienna on Los Osos Valley Road near West Foothill Boulevard when he crossed into oncoming traffic in the westbound lane, according to the CHP. Pooler’s Sienna clipped an oncoming BMW and then crashed head-on into a Toyota 4 Runner.

The driver of the BMW, 49-year-old Marcus Tribelhorn of Los Osos, swerved to avoid a head-on crash. The back-end of his BMW sustained significant damage in the crash.

Cory Fiscus, 19, of Los Osos, the driver of the 4 Runner, did not see Pooler’s oncoming vehicle until it was too late. The collision ejected Fiscus from his vehicle. Responders transported Fiscus to Sierra Vista Regional Medical Center with major injuries.

Following the crash, Pooler was trapped inside his vehicle and needed to be extricated. Pooler also suffered major injuries and was transported to the hospital.

Pooler is facing a charge of DUI resulting in injury. An investigation into the crash is ongoing.