The California Highway Patrol has released aerial footage of last week’s chase from Pismo Beach to the Los Padres National Forest that shows the suspect driving off-road, dodging spike strips and running away from authorities.

On Friday afternoon, a Pismo Beach police officer spotted a stolen black Ford pickup truck and attempted a traffic stop. The driver, Joshua Anthony Jordan, 40, fled southbound on Highway 101 before driving eastbound on Highway 166. Jordan then turned right onto Sierra Madre Road, a rough dirt road that leads into the forest, according to the CHP.

Video released by the CHP shows Jordan driving along the dirt road and twice evading spike strips. At one point, footage shows Jordan stopping the truck, getting out of the vehicle, picking the spikes off the ground and throwing them on the side of the road. He then gets back in the truck and keeps driving.

When Jordan comes upon a spike strip for the second time, he tries driving around the spikes with a patrol car on his tail. Jordan drives off the side of the road, kicking up a large cloud of dust.

Officers exit their vehicles and try to apprehend Jordan, but he starts driving off-road, heading down a hill through thick vegetation. Jordan drives down the hill until getting the truck stuck.

He then gets out and flees by foot. Officers eventually surround Jordan on a rock and arrest him at gunpoint, before walking him back up to the dirt road.

Friday’s incident was not the first time Jordan led officers on an off-road chase. In July 2017, Jordan led officers on a chase that started in Nipomo and ended with beach goers running for safety at the Oceano Dunes. Jordan’s vehicle became stuck in the sand, and he attempted to outrun officers, who caught him and arrested him for evading arrest and endangering children playing in the sand.

Jordan has remained in San Luis Obispo County Jail since Friday on charges of resisting and obstructing arrest, receiving stolen property, driving a vehicle without consent and a parole violation. His bail is set at $50,000. 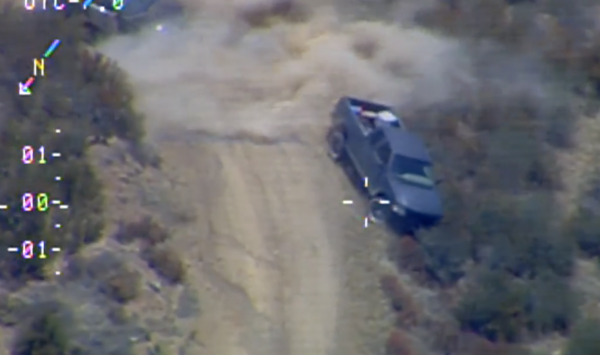