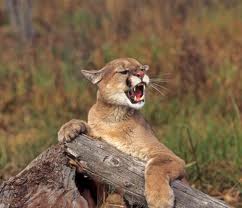 Cuesta College is warning students and staff about a mountain lion that was spotted walking near the edge of the college campus on two different evenings this week, according to the college’s police department.

Mountain lion spottings are not uncommon because the campus is adjacent to open areas that contain wildlife, police said. Anyone who spots a mountain lion should not turn and run.

Rather, college police instruct individuals who spot a mountain lion to face the animal, stand up straight, appear as large as possible, waive their arms in the air and scream. Likewise, anyone who comes across a mountain lion should throw objects like books or a backpack at the animal without bending over to reach for any items.

If attacked, individuals should fight back. Fists, sticks and clothing can be used to fend off an attacking mountain lion, police say.

Additionally, anyone who spots a mountain lion at Cuesta College is asked to report the animal to campus police by calling (805) 546-3205.