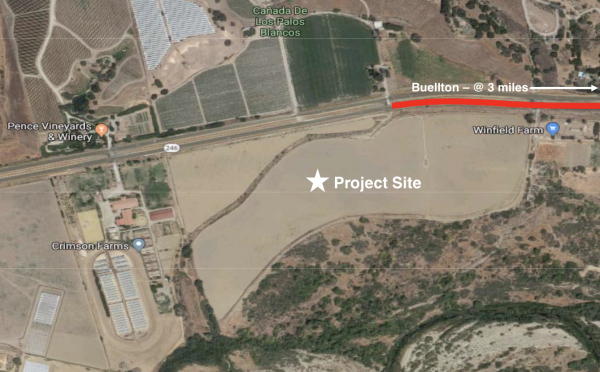 The owner of a rural Buellton winery has appealed proposals for two large marijuana grows that would be located next to his vineyards, a matter that came before the Santa Barbara County Planning Commission on Thursday.

Blair Pence owns Pence Vineyards & Winery, which is located on a 220-acre ranch along Highway 246 outside the Buellton city limits. Pence recently appealed plans for two separate marijuana cultivation projects that would be located next to his winery and vineyards.

One project, which is a proposed Santa Rita Valley AG operation, is situated on a 38-acre site. Project plans call for 32 acres of outdoor pot cultivation, as well as 25 320-square-foot shipping containers that would be used for drying and storing marijuana.

The second project, which is a proposed Santa Barbara West Coast Farms operation, is situated on an approximately 73-acre site that was previously used for berry and squash farming. Project plans call for 45 acres of outdoor cultivation and five acres of space for a nursery and the processing and storage of cannabis.

Pence is appealing the projects on a number of grounds, including that they would create an over-concentration of marijuana grows along Highway 246. The winery and vineyards owner also claims the marijuana grows would create foul odors, security issues and excessive traffic that would cause dust flows, which would impact the health of his crops.

On Thursday, planning commissioners raised concerns about the projects and delayed ruling on them. County planning staff, who have already approved permits for the projects, are recommending that commissioners deny Pence’s appeals.

In recent years, Santa Barbara County has emerged as the unlikely capital of California’s legal pot market, leading to a backlash from residents and vintners impacted by the smell, as well as farmers faced with concerns over crops becoming tainted. In both the Santa Ynez and Santa Maria valleys, complaints have arisen about the smell of marijuana overwhelming wine tasting rooms downwind of the grows and polythene hoop houses becoming eyesores.

The county planning commission will reconvene on Sept. 13 to discuss the appeals of the rural Buellton projects.