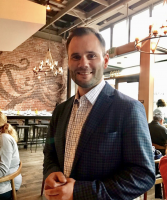 Amid ongoing credit problems and a lawsuit stemming from a failed San Luis Obispo bowling alley project, an embattled local developer has closed a downtown SLO tapas restaurant that he opened just five months ago. [Tribune]

Jeremy Pemberton said his tapas and seafood restaurant, Branzino, closed on Aug. 2, pending a potential sale or recapitalization. The restaurant is closed because of financial challenges associated with a poor credit rating, Pemberton said.

Pemberton was a managing partner of the Discovery SLO project, which consisted of plans to build a bowling alley and entertainment venue in downtown San Luis Obispo. Faced with allegations of hundreds of thousands of dollars in unpaid bills, Jeremy Pemberton and his twin brother Joshua Pemberton scrapped the project.

Carlos “Javi” Fajardo of San Luis Obispo invested $500,000 in the Discovery SLO project. As the project was falling apart, Fajardo demanded to inspect financial records, which he had the right to do under the partnership agreement, the investor said.

After receiving no response, Fajardo sued Jeremy Pemberton in June 2018, stating in the lawsuit that he had no idea about the status of the project or how his funds had been used. On May 9, Judge Tana Coates ruled Pemberton had to pay Fajardo $593,000, which included interest accumulated on the investment and legal fees.

But on Aug. 2, the judge vacated the nearly $600,000 judgment against the developer. Pemberton is no longer ordered to pay the sum immediately, but the lawsuit is ongoing, and a case management hearing is set for Aug. 26.

In addition to allegedly owing Fajardo more than $500,000, Pemberton owed American Express $87,652 on March 24, 2019, according to a lawsuit filed by the credit card company.

Pemberton said last week he believes his credit rating will improve after he clarifies issues with credit companies.

Previously, multiple Branzino employees said they were not being paid in full for their work. Pemberton has claimed in response that some checks to restaurant employees initially bounced, but all workers have been paid for their work to date.

Currently, Branzino is in limbo, Pemberton said. The restaurant owner said he is meeting with potential buyers, but no agreements have been reached and he would know more about the status of the business on Monday.

Additionally, Pemberton said it is difficult doing business in San Luis Obispo compared to elsewhere in the United States because of the scrutiny of local development projects, as well as the high cost of labor in California. He said he has been trying to work his way out of a downward spiral.

In the past, Jeremy and Joshua Pemberton’s business dealings resulted in claims of fraud, a bankruptcy involving $1.4 million in unpaid wages and charity pledges that were never fulfilled. They also settled a lawsuit with an international real estate company that alleged the brothers’ company owed $750,000 in unpaid rent for the downtown SLO property they were leasing for the bowling alley project.