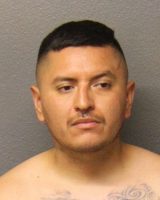 Santa Maria police arrested a man after a suspect fired shots at a home in a residential neighborhood Friday morning.

At about 8:20 a.m., shots were fired at the home on the 1400 block of Elm Street. Gunfire struck the home, but no one suffered injuries as a result of the shooting. [KSBY]

Shortly after the shooting, officers arrested Jose Gilbert Sendejas, 30, on a charge of being a felon in possession of a firearm.

Officers detained multiple suspects following the shooting, though police have not announced arrests of anyone other than Sendejas. Police said they were investigating Sendejas’ possible involvement in the shooting.

A woman who lives in the house that was struck by gunfire said she was not home at the time of the shooting, but other members of her family were. The woman had taken her son to school when an officer called to inform her about the shooting.

Police have not disclosed a possible motive for the shooting.