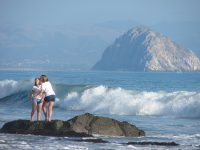 Rescue crews ascended Morro Rock Sunday evening in search of a climber and, despite have aerial assistance, failed to find the individual. Meanwhile, in an apparently unrelated case, emergency personnel tended to an unresponsive person below, who received CPR before being transported to the hospital. [KSBY]

Initially, reports suggested there were possibly two people on Morro Rock. Morro Bay Fire Marshal Matt Viera said an engine was already at the scene of the cliff rescue, since paramedics were performing CPR on the unresponsive man.

The two incidents appear unrelated. Officials have not disclosed the condition of the man who received CPR.

The rescue crews reached the area at the top of the rock but could not find the alleged climbers. Authorities then suspended the search.