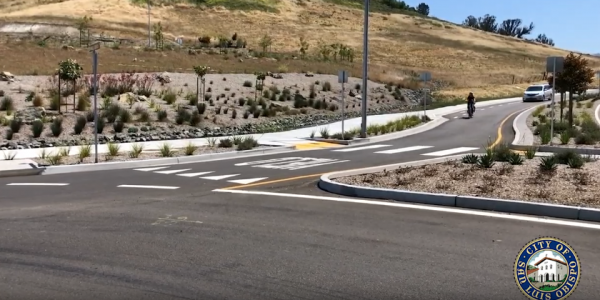 Every so often, it’s fun to pop over to slocity.org, our fair city’s official spokes-site, to check out “What’s New In SLO,” our San Luis Obispo’s official news headline service.
This week, “Roundabouts are the City’s preferred form of intersection control.” Note how they capitalize “City” as if it’s somebody’s name.

Gone will be simple intersections, stop signs, traffic signals. In the future, we’re to drive in circles where streets meet.

Put that in your pipe and smoke it! Or not, since like roundabouts smoking’s probably harmful to your health.

In preference to orderly four-way stops we’re to have bump-and-dent lanes in the round. Everyplace they’ll fit. And since our fair city thinks they fit in tiny intersections on Chorro Street south of downtown, I guess they’ll fit anyplace.

Which is interesting since three of the city’s four existing roundabouts are those on Chorro Street, placed not to facilitate better movement but to delay and obstruct otherwise free-flowing movement by sticking roundabouts in intersections with little traffic. The slow-then-step-on-the-gas driving these choke-points produce creates more greenhouse gas than steady-speed driving. So SLO City, do you even try to edit your “news” for consistency? Or do you think nobody notices your contradictions and illogic?

The message is clear: this is tricky stuff — so tricky we need video instruction. And in fact it turns out to be very tricky for drivers, bikers and walkers compared to a good old fashioned traffic signal with red and green and walk lights.

For drivers, for example, it goes like this: “Slow down and watch for pedestrians and bicyclists crossing as you approach the roundabout. Yield to traffic already in the roundabout coming from your left. Once you see a gap in traffic, turn right into the circle and proceed counter-clockwise along the circle until you reach the exit that matches your destination. Use your turn signal and watch for pedestrians and bicyclists crossing again before you exit. Also, make sure to look out for bicyclists who may be sharing the travel lanes to navigate the roundabout as well.”

Got that? Sounds very “efficient,” especially for the nervous system. “Yield” means stop till there’s “a gap in traffic,” which we all know from that cool roundy just off the freeway in Morro Bay that it never happens when there’s lots of traffic.

Then there are those pesky bikers and walkers, always in the way, crossing again, darn ‘em, who are assured elsewhere in “What’s New” that “Roundabouts can reduce the amount of time pedestrians and cyclists wait to cross an intersection and the speed of traffic at crossing points.”

The city claims a roundabout is safer for pedestrians, yet as a walker, I’m mystified how crossing in front of stopped traffic at a stop light is more dangerous than trekking through the continuously moving traffic of a roundabout.

Our city apparently thinks the “safety” factor for pedestrians stems from their having to walk some distance beyond the intersection to a crosswalk across the exit/entrance lanes to the roundabout, which seems really safe, eh? Not to mention quick and convenient.

Bikers have two choices, says our city: Go through the roundabout with motor vehicles, or chicken out and get on the sidewalk and endanger pedestrians. Since the first choice seems contradictory to our city’s premise the way to improve bike safety is ramming bikeways through neighborhoods, the neighbors be damned, to separate bikes from vehicles, and the second choice presumes pedestrian safety improves when bikers over the age of 12 ride on sidewalks, one must marvel at the city’s bike and pedestrian safety arguments.

The instructional videos are quite lovely. They show roundabouts with almost no vehicles, so it’s a breeze to drive through one, bike through or around one, and to use the roundabout pedestrian route required of foot people to negotiate a roundabout.

As for implementation, there’s already a lovely sample roundabout on Prado Road in the middle of the new housing subdivision out there. Prado currently ends at a farm gate, so this roundabout has the sort of traffic volume shown in the videos. But soon it will become the major multi-lane truck route across town, linking Madonna and 101 to industrial South Broad, with a spinoff – via another roundabout – to Santa Fe and Tank Farm and the airport industrial area.

The noise of thousands of 18-wheelers slowing for and then gearing out of these roundabouts will add much to the quality of life of these new residential areas – as will the increased diesel fumes from all that gearing down and gearing up. But, hey, roundabouts are the preferred intersection configuration, so stop complaining. They’re the future. Complaining is not.

Next up – a roundabout to be installed on California Boulevard at Taft Street for which the city has budgeted more than $300,000 this year to replace a perfectly good three-way intersection. California Boulevard is a major vehicular route to and from Cal Poly and the entire north end of town, so this will be the city’s first demonstration of its preferred intersection configuration with actual traffic.

Probably 95 percent of that traffic is through-traffic on California Boulevard, so thousands of drivers daily, who are going straight ahead, will be slowing who previously were going at a steady speed, then accelerating out of the roundabout and polluting more than before as they step on the gas.

California Boulevard is also a major pedestrian route, so those pedestrians will have to step out of their way, going up Taft Street a ways, to cross Taft Street — in front of moving cars instead of stopped cars.

And this, we are promised, is but the first of many high-volume intersections to be retrofit with roundabouts. For millions of dollars. All to make us safer and make travel in SLO City more convenient.