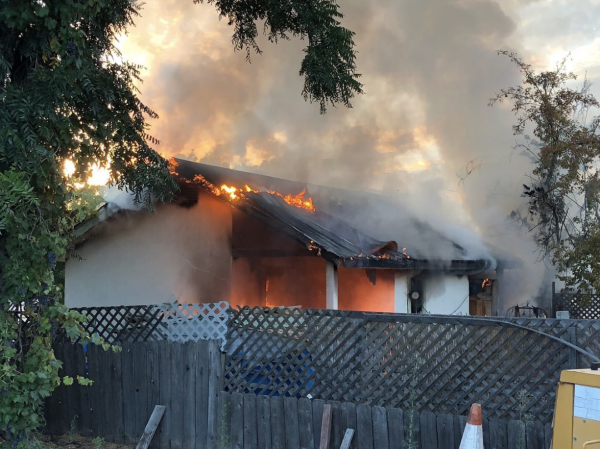 Firefighters arrived to a house fire in Atascadero on Monday evening to find the home engulfed in flames, prompting a closure of a section of El Camino Real and a search for an alleged arsonist.

At about 7 p.m., firefighters responded to a fire at 1535 El Camino Real and quickly discovered the cause appeared to be arson. Shortly before firefighters arrived, a small truck quickly fled the home, witnesses told investigators.

Officers discovered the truck belonged to Charles Scovell, a resident of the home.

Shortly before midnight, an Atascadero police officer located Scovell’s truck leaving Motel 6 on El Camino Real and attempted to stop the vehicle. Scovell sped away and a vehicle pursuit ensued.

Officers pursued Scovell into Paso Robles and onto Highway 46 East past Airport Road. Scovell turned around and the pursuit continued back to the City of Paso Robles.

At the intersection of 46 East and the Highway 101, Scovell got out of his truck.

Scovell, however, refused to comply with officer commands and a K9 was deployed. Before the dog could get to him, Scoville got back into his vehicle and took off southbound on Highway 101 at speeds of more than 100 mph.

Officers laid down spike strips on southbound Highway 101 at Curbaril Avenue, which slowed but did not stop Scovell.

Officers later located Scovell’s truck in the driveway of Motel 6 in Atascadero, where Scovell had rented a room. Officers surrounded Scovell’s room and called for him to surrender, but he refused.

Because of Scovell‘s violent history and ownership of firearms, the San Luis Obispo County Special Enforcement Detail was called to assist.

Following a lengthy standoff, Scovell was eventually taken into custody after deputies forced entry into his room.

Medical personnel transported transported Scovell to Twin Cities Hospital for injuries sustained during the incident. After he is released from the hospital, officers plan to book him into the San Luis Obispo County Jail for evading a peace officer, resisting arrest, and other related charges.

Investigators are asking anyone with any information regarding the arson to contact Sergeant Jeff Wilshusen at (805) 461-5051.