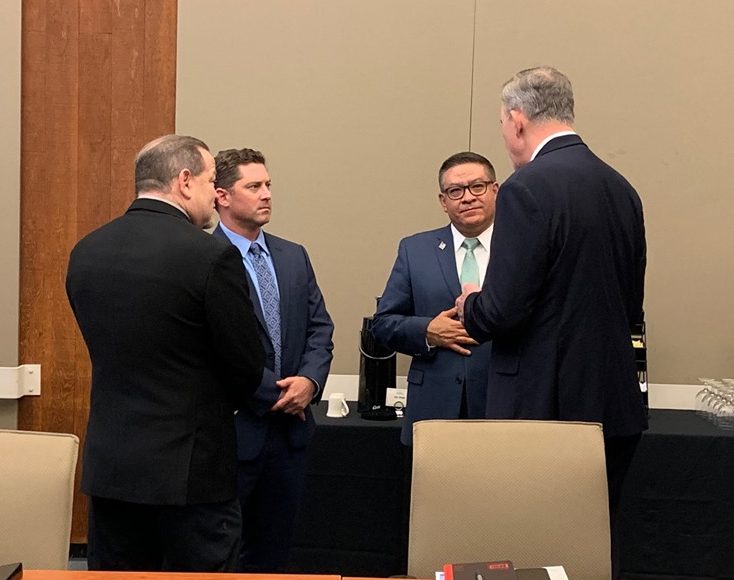 In a recent email ad requesting money, San luis Obispo County Supervisor Adam Hill posts a photo of himself at a wind energy event attended by both Republicans and Democrats as proof of his bipartisan leadership.

In his donation plea, Hill says he will soon have a challenger for the District 3 supervisor seat. Hill then touts his experience and bipartisan leadership before asking for donations.

“I’ve been warned an opponent will be announcing against me any day now, so your help is critical,” Hill writes. “With so many important challenges before us, it’s important to have smart, effective, and non-partisan leadership in our community.”

Above the photo Hill posted of himself with Congressman Salud Carbajal (D), Assemblyman Jordan Cunningham (R), and Assistant Secretary of Defense for Sustainment Robert McMahon, Hill writes, “This is the kind of experience and bi-partisan leadership that I bring to the table.”

Hill, Carbajal and Cunningham were at the meeting jointly voicing their support for a proposed field of 700-foot floating wind turbines offshore of Morro Bay. There is a strong possibility the U.S Navy will oppose the project because of possible impacts on military operations.

While the five members of the SLO County Board of Supervisors generally vote unanimously, during discussions over contentious issues, Hill regularly hurls insults and accusations of wrongdoing against Republican members of the board.

After multiple reports of Hill threatening, demeaning and cursing at people with opposing views, in 2018, Hill took time off to deal with his depression and frequent outbursts.