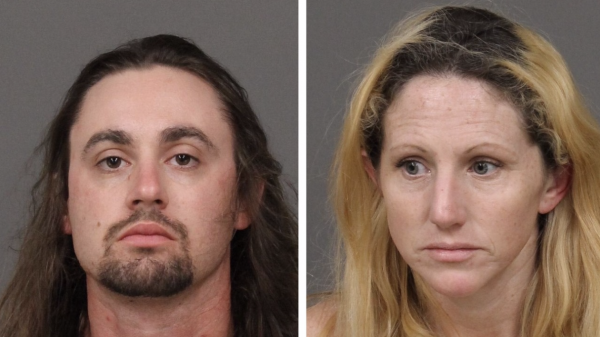 San Luis Obispo County Sheriff’s deputies arrested a man and woman Wednesday after a search of a Cayucos home allegedly netted drugs, including methamphetamine and an apparent opioid, as well as a gun and other contraband.

At about 7 a.m., Coast Station patrol deputies and the Sheriff’s Special Operations Unit served a search warrant at a home in the 3400 block of Ocean Boulevard Derek Robin Thane Atkins, 30, and Carrie Anne Maggard, 39,reside. Inside the home, deputies found drugs and weapons.

Investigators seized scales, baggies, street-level-sales amounts of methamphetamine and other paraphernalia indicative of narcotics sales. Likewise, they found a packaged substance that tested presumptive positive for fentanyl, a powerful and dangerous synthetic opioid.

Investigators also seized a loaded firearm, as well as burglary tools and allegedly stolen property, according to the sheriff’s office.

Maggard remains in custody with her bail set at $50,000, according to the sheriff’s office website. Atkins is not listed as currently being in custody.

Investigators are trying to locate the owners of suspected stolen property recovered in the home.