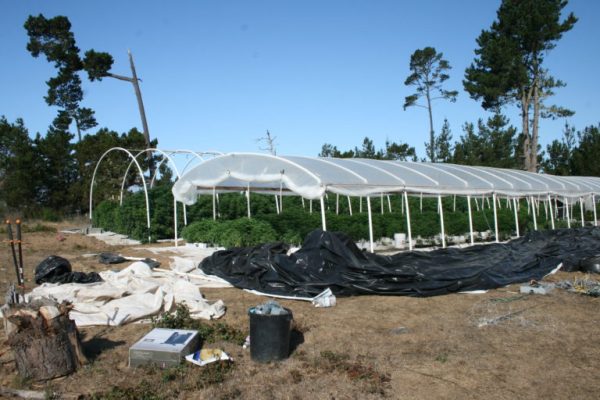 Deputies destroyed 1,820 marijuana plants they found on Thursday growing near the intersection of Main Street and Santa Rosa Creek Road on private property in Cambria, according to the San Luis Obispo County Sheriff’s Department.

While searching for a homeless encampment, deputies found the pot grow on a hilltop within 1,000 feet of both Coast Union High School and Cambria Middle School. The owner of the property lives out of the area and was unaware of the illegal activity taking place on his property.

At the grow site, deputies found two abandoned dogs, but no people.

The trespassers had created a fairly sophisticated grow which included the clearing of trees, the inclusion of seven hoop houses, four large water tanks and an extensive drip irrigation system. There were large chemical tanks for pesticides, generators and an electrical panel to supply power.

The plants seized were mature with a net weight of almost 8,000 pounds. The estimated retail value of the plants is approximately $1.9 million dollars, according to deputies.

An investigation into the illegal grow is ongoing.