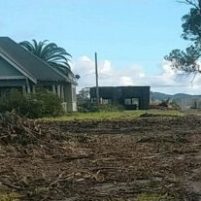 The fire that burned a historic barn on the former Dalidio Ranch on Madonna Road was caused by a person or people, according to San Luis Obispo fire officials. [KSBY]

On Feb. 8, a fire burned a barn on the former Dalidio property, currently the site of developer Gary Grossman’s San Luis Ranch project. The blaze almost completely destroyed the barn, with just one of its walls being salvaged.

In the 1800s, the barn was used as a viewing and staging area for horse races. As part of the San Luis Ranch project, Grossman was required to preserve the barn. At the time of the fire, Grossman was in the process of moving the historically designated building.

SLO Fire Marshal Rodger Maggio said investigators have ruled out an electrical failure as the cause of the fire. However, the investigation has not revealed a specific ignition point.

Possible causes include arson and someone having started a warming fire because it was a cold, rainy night, Maggio said. Investigators could not confirm whether or not there were homeless people at the site of the blaze when it started, though it is a possible scenario.

Investigators are searching for a person who may have been seen in the area when the fire began.

Following the fire, speculation arose among critics of Grossman that the blaze was started to spare the developer the need to move the barn.

The one wall of the barn that was salvaged is being kept on the San Luis Ranch property. A spokesman for San Luis Ranch said it is yet to be decided what will be done with the remaining wall.